WTF Happened Over the Weekend of June 29th

A place to discuss the weekend news from June 29th to July 1st.

Check Current Status for the latest.

Massive protests against Trump immigration policies planned in all 50 states 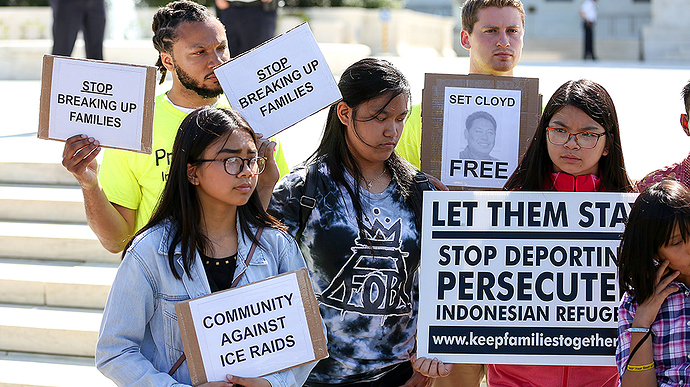 Protesters are expected to demonstrate nationwide on Saturday against President Trump’s immigration policies.

The Trump administration plans to detain migrant families together in custody rather than release them, according to a new court filing that suggests such detentions could last longer than the 20 days envisioned by a court settlement. Trump administration may seek to detain migrant families longer than...

A new court filing suggested the families could stay together, but in detention — a practice which could anger advocates and judges.

More damning information regarding Arron Banks, the British businessman who’s been giving money to pro-Brexit causes, and evidence reveals ties to Russian meddling in the Brexit issue. T’s inclusion in the Russian meddling are apparent by the large amounts of money coming in from Russia via his campaign, Cambridge Analytica etc. A lot of overlapping interests and quid pro quo - this for that idea.

On Friday evening, the New York Times revealed new detail about Russian involvement in the Brexit vote. The more we learn, the more clearly the pattern of behavior in the two countries becomes similar, and the more suspicious the denials of Putin’s partners grows.

In both countries, the right-wing pro-Russian populists indignantly insist there is no more incriminating information to be found beyond what was known at any given moment, even as the bounds of what is known at any moment continues to expand. In Britain, billionaire businessman Arron Banks financed the Brexit referendum with the largest donation in British history.Initially, he copped to having one meeting with Russian officials. After the Guardian obtained secret documents blowing up this claim, he admitted there were actually three meetings. Now the Times has even more information, and Banks concedes the number of covert meetings has grown to four.

At the secret meetings with Russians, Banks was dangled the prospect of lucrative gold and mining deals. In the course of speaking with the Times, Banks changed his story: “In interviews earlier this week, Mr. Banks initially said he knew nothing about the [mining] project. Then he later said he remembered hearing about it from the investment banker but did not pursue it.”

Meanwhile, back in the United States, Donald Trump and many members of his inner circle have a long trail of financial ties to Russia. The overt behavior looks remarkably similar. Trump and his cronies refuse to disclose their precise financial connections (by, for instance, following the established norm of a presidential candidate publishing his tax returns.) They continuously lie about the number and nature of their covert contacts with Russian officials, then keep insisting with each new disclosure that there is no more to disclose and the whole question is a witch hunt. Meanwhile, they continue to deliver a policy outcome payoff to Putin.

Yesterday alone, reports have emerged that Trump offered Emmanuel Macron a better deal if France would exit the European Union, refused to rule out accepting Russia’s claim to seized territory from Ukraine, and that his government is studying the possibility of withdrawing troops from Germany. Like Banks’s winking “what could the Russians have wanted from me?” defense, Trump is virtually daring his critics to draw the obvious conclusion. 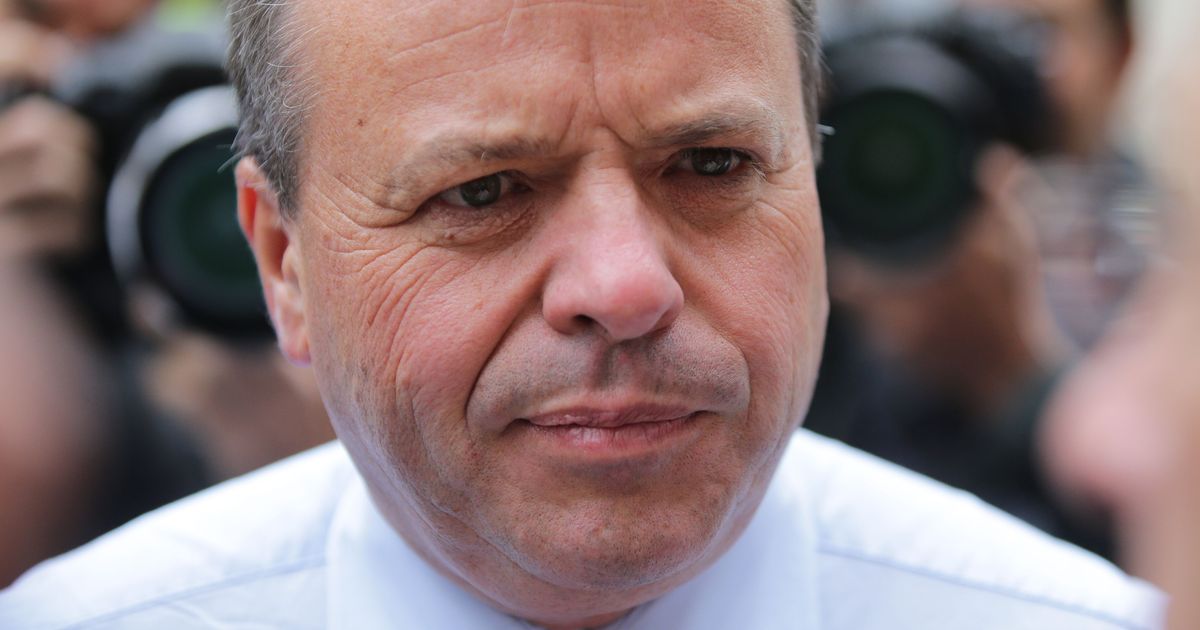 The Other Russia Collusion Scandal Is Breaking Wide Open

Putin appears to have funneled millions to support the Brexit vote, just like Trump’s election. His British partner’s cover story is falling apart.

Story that is mentioned here. 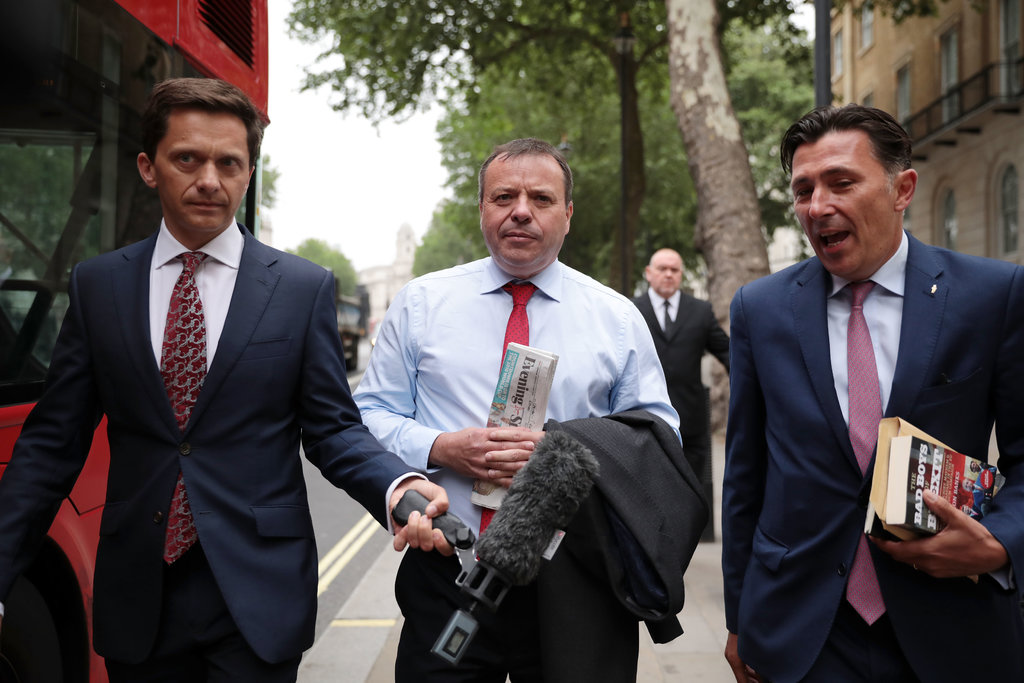 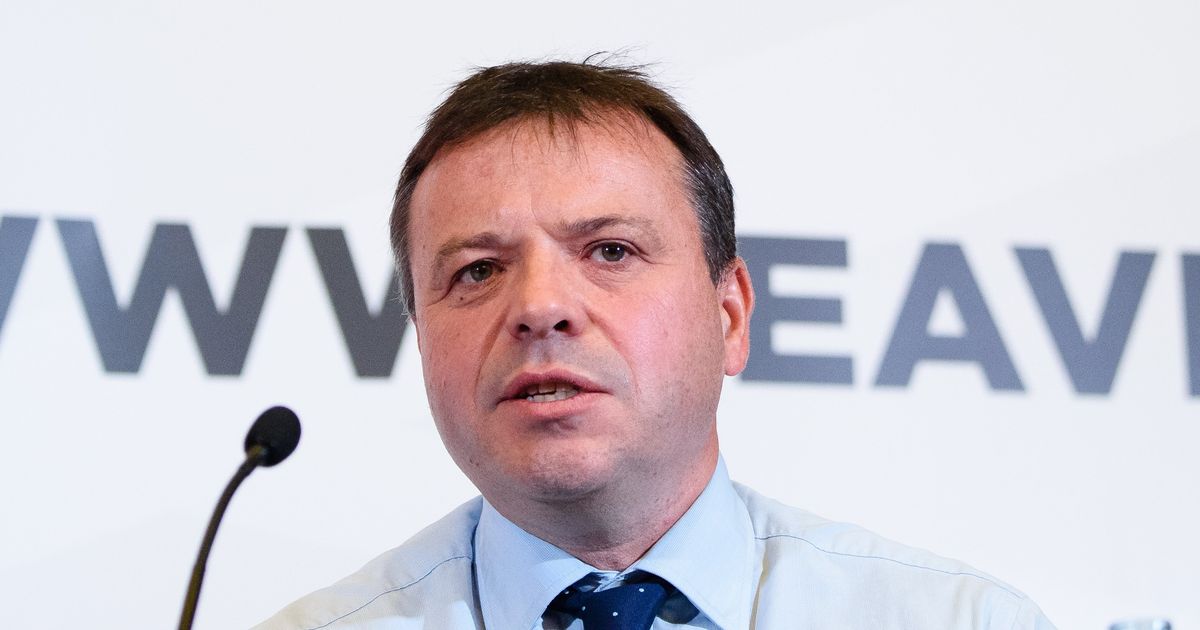 A trove of leaked emails have exposed the extensive Russian ties of two top Brexit supporters in the U.K. who later threw their weight behind Trump.

Yes, this Justin Kennedy/T relationship is sketchy…too many in place influencers (read- loyalists.) The double-jeopardy clause comes to mind in choosing his father’s successor. Murky at best.

I don’t understand those calling on the left to avoid exploring the Justin Kennedy/Trump relationship.

There is no way to understand Trump Org. business without knowing much more about his relationship with Deutsche. Every Trump Org watcher is looking into it.

We need to do a ton more work to know what Justin Kennedy was doing. But whatever it was, he was doing things no other banker was willing to do with a client (Trump) doing deals in CIS countries and elsewhere with people no other American businessperson would work with.

3/
Even if Justice Kennedy never resigned or was never on the supreme court, Justin Kennedy would be a major focus of any substantive reporting into Trump’s business.

4/
We should be cautious, diligent, obsessively accurate, of course. We should withhold any conclusions until we know a lot more. 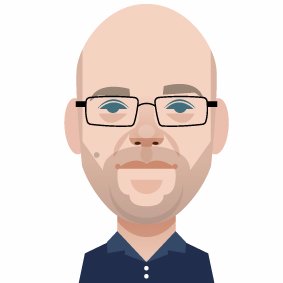 I don't understand those calling on the left to avoid exploring the Justin Kennedy/Trump relationship. There is no way to understand Trump Org. business without knowing much more about his relationship with Deutsche. Every Trump Org watcher is looking into it. 1/
1 Like
dragonfly9 July 2, 2018, 3:27am #7

Axios reporting tonight about T’s intent to ‘blow up WTO,’ and grant himself authority to raise and lower tariffs at will. Easing up on our trading agreements, unbuckling of established relations…looks like a big problem to me. Not an economist, but do believe all the untangling of international agreements may not be great for the farmers in the USA. etc. And we should not be giving T unbridled power.

Axios has obtained a leaked draft of a Trump administration bill — ordered by the president himself — that would declare America’s abandonment of fundamental World Trade Organization rules.

Why it matters: The draft legislation is stunning. The bill essentially provides Trump a license to raise U.S. tariffs at will, without congressional consent and international rules be damned.

The details: The bill, titled the “United States Fair and Reciprocal Tariff Act,” would give Trump unilateral power to ignore the two most basic principles of the WTO and negotiate one-on-one with any country:

“Bound tariff rates” — the tariff ceilings that each WTO country has already agreed to in previous negotiations.

“It would be the equivalent of walking away from the WTO and our commitments there without us actually notifying our withdrawal,” said a source familiar with the bill.

The good news is Congress would never give this authority to the president," the source added, describing the bill as "insane."

“It’s not implementable at the border,” given it would create potentially tens of thousands of new tariff rates on products. “And it would completely remove us from the set of global trade rules.”

Be smart: Congress is already concerned with how Trump has been using his trade authorities — just look at recent efforts by Republican Sens. Bob Corker and Pat Toomey and Democratic Sen. Michael Bennet to roll back the president’s steel and aluminum tariffs.

The bottom line: As a smart trade watcher told me: "The Trump administration should be more worried about not having their current authority restricted rather than expanding authority as this bill would do." 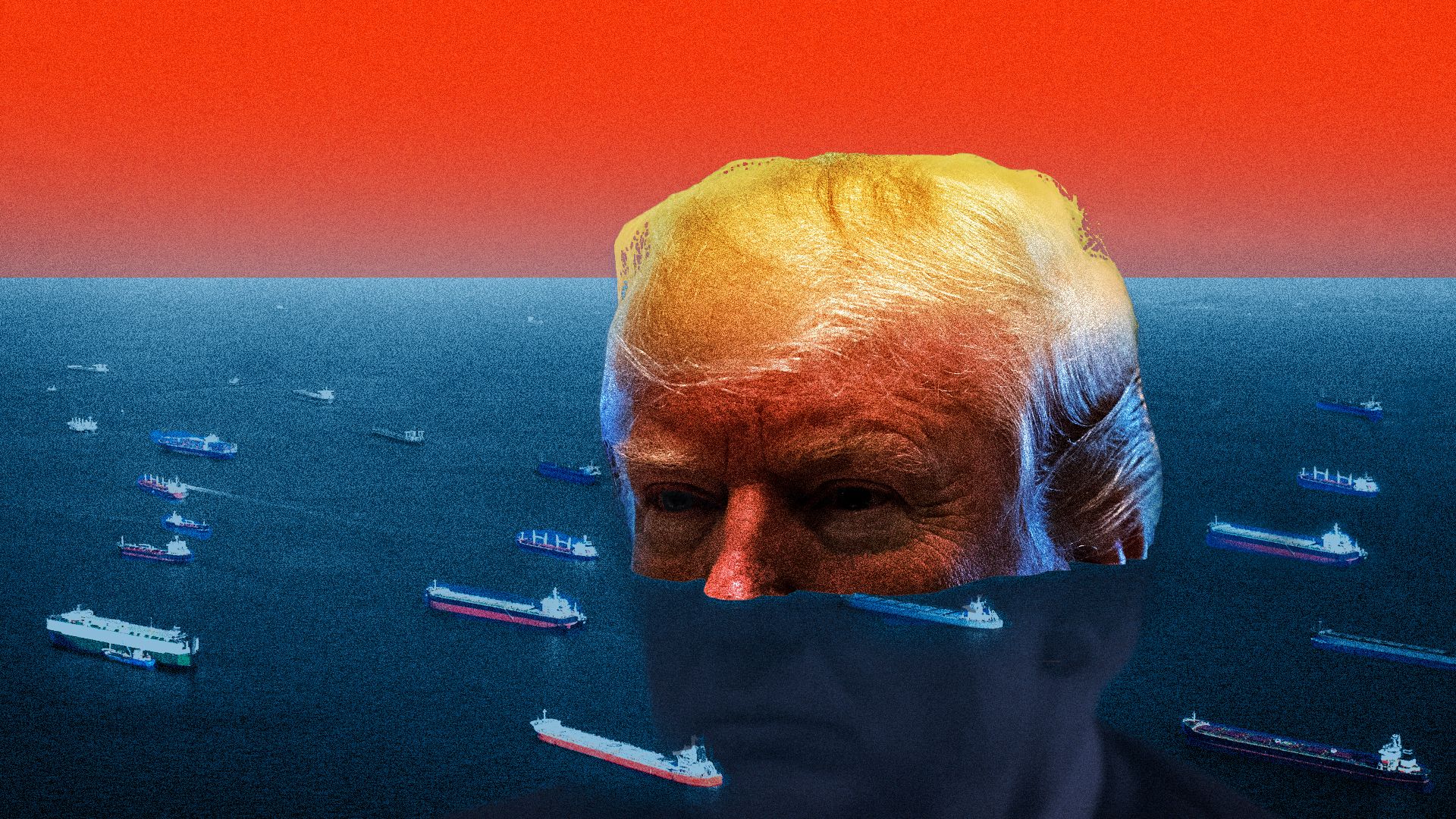 Exclusive: A leaked Trump bill to blow up the WTO

Most officials involved in the bill's drafting think it's unrealistic or unworkable.

He is going be on GMA on Monday morning. Here comes something. 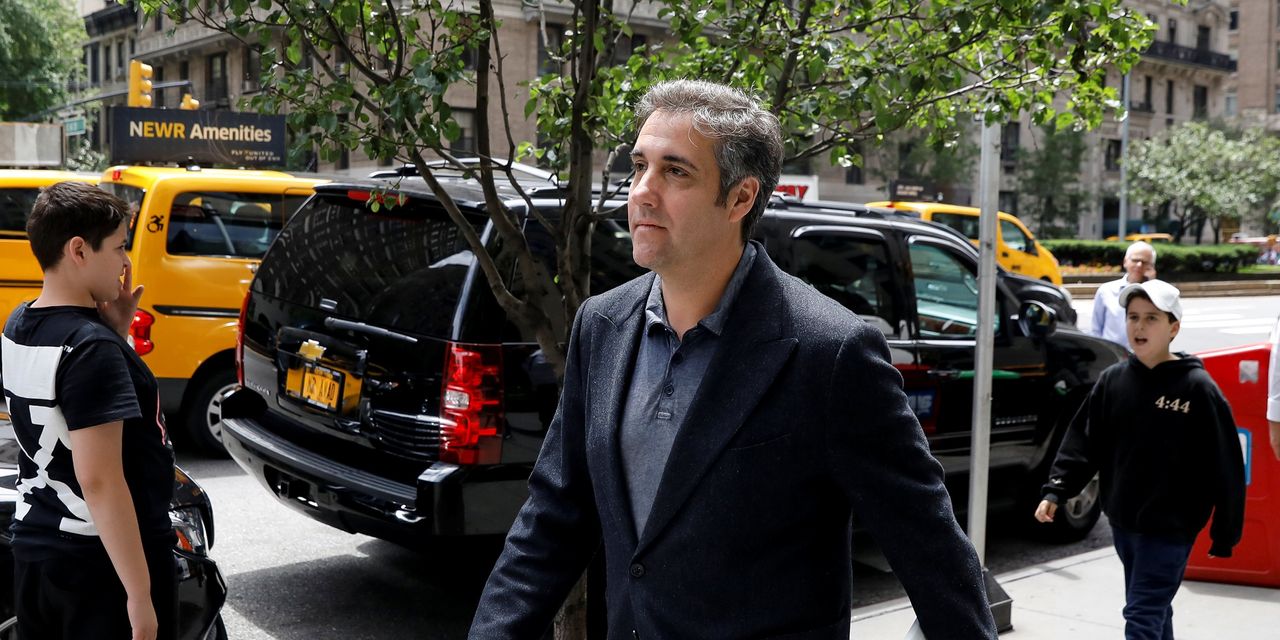 A top Republican fundraiser said he would stop making payments to a former mistress who signed a hush-money agreement that was negotiated last year by Michael Cohen, President Trump’s longtime lawyer.

Now maybe we’ll finally find out what’s really behind this dubious hush money arrangement. Shera Bechard, who was receiving the hush money, now has little motive for hushing up. You’d think she could make more money selling a “tell all” book than she could fighting in the courts to have the payments resumed. I’m sure she will proceed with caution, though, knowing that a legion of Trump Organization lawyers will be coming after her – (even though this has nothing to do with Trump – wink, wink, nudge, nudge).

Cohen strongly signaled his willingness to cooperate with special counsel Robert Mueller and federal prosecutors in the Southern District of New York – even if that puts President Trump in jeopardy.

“My wife, my daughter and my son have my first loyalty and always will,” Cohen told me. “I put family and country first.”

When I asked Cohen directly what he would do if prosecutors forced him to choose between protecting the president and protecting his family, he said his family is “my first priority.”

Cohen added: “Once I understand what charges might be filed against me, if any at all, I will defer to my new counsel, Guy Petrillo, for guidance.”

But when I pointed out to Cohen that he wasn’t repeating past vows to “take a bullet” and “do anything” to protect the president, the longtime Trump loyalist left little doubt about where he stands now, saying simply: “To be crystal clear, my wife, my daughter and my son, and this country have my first loyalty.”

“I will not be a punching bag as part of anyone’s defense strategy,” he said emphatically. “I am not a villain of this story, and I will not allow others to try to depict me that way.”

“I don’t agree with those who demonize or vilify the FBI. I respect the FBI as an institution, as well as their agents,” Cohen told me. “When they searched my hotel room and my home, it was obviously upsetting to me and my family. Nonetheless, the agents were respectful, courteous and professional. 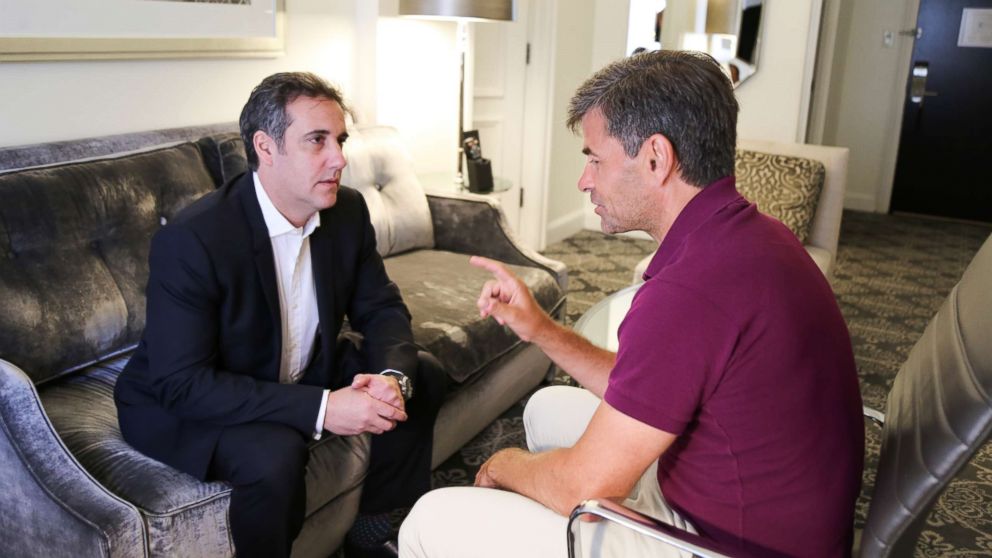 EXCLUSIVE: Michael Cohen says family and country, not President Trump, is his...

Michael Cohen told George Stephanopoulos that his family is his "first loyalty."

Great finds, fam. Closing this now in favor of discussing in the daily thread.

Look, look at them all!

Maybe there’s one in your closest city.

Donald Trump and his administration have cruelly separated thousands of children from their families. Now they're jailing families -- and they haven't yet reunified the families already brutally torn apart.  But we won't allow it to...