Trump campaign runs ads with marking once used by Nazis to designate political...

The red inverted triangle was first used to identify Communists, and applied as well to members of other opposition parties. 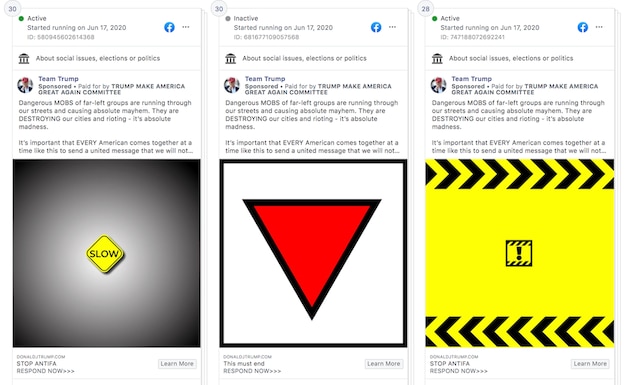 Trump has made antifa — a label associated with anti-fascist protesters who infamously sparred with far-right figures after his election in 2016 — a centerpiece of his response to recent demonstrations in the aftermath of the killing of George Floyd in police custody in Minneapolis. The effort to rally his supporters using the specter of a marauding horde resembles the emphasis he placed on the threat of a migrant caravan heading to the U.S. border in the lead-up to the midterm election in 2018.

So far, however, the alleged menace has been mostly nonexistent — a focal point of online alarm not reflected in scenes of mostly peaceful protest nationwide. Despite warnings of antifa incursions in scores of cities, there is no evidence linking outbursts of violence to an organized left-wing effort. 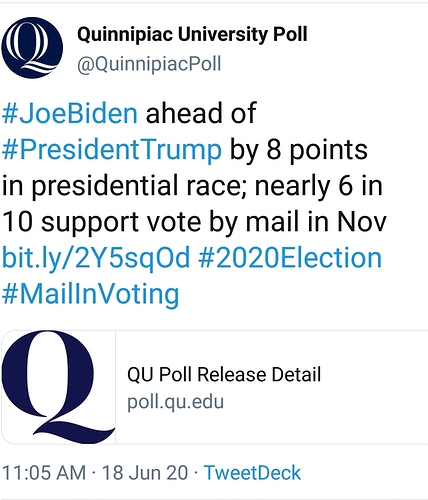 Biden Ahead Of Trump By 8 Points In Presidential Race, Quinnipiac University National Poll Finds; Nearly 6 In 10 Support Vote By Mail In November

Glad that they recognized this had to be done. Just a start. 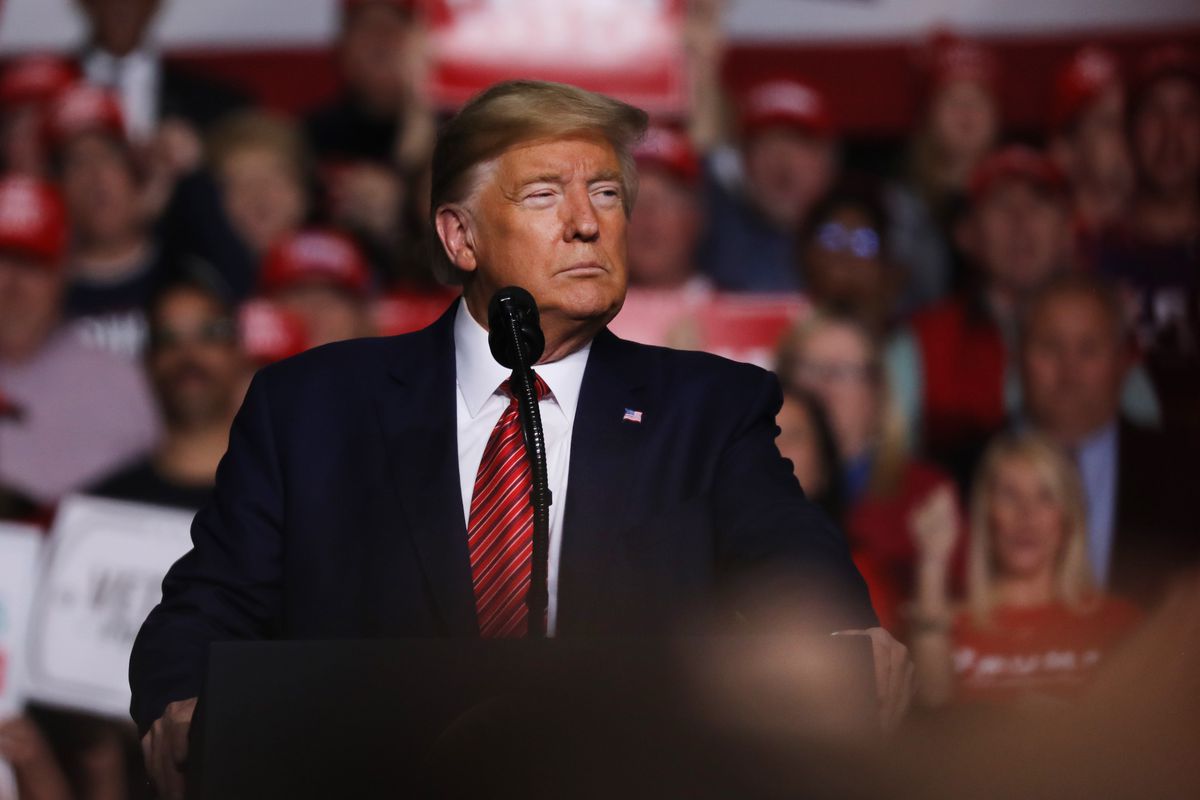 “We removed these posts and ads for violating our policy against organized hate,” a Facebook spokesman said.

The disturbing campaign ad, which was launched Wednesday, called on Facebook users to sign a petition hailing Trump’s decision to designate Antifa as a terrorist organization and charging without evidence that members of the left-wing movement are “running through our streets and causing absolute mayhem.”

Beneath the ad’s text is a picture of a red upside-down triangle.

Badges with the exact same symbol were sewn onto the sleeves of political prisoners in Adolf Hitler’s concentration camps during World War II. The Nazi party’s dreaded paramilitary arm Schutzstaffel, or SS, who ran the camps put the red triangles on anyone from communists and anarchists to trade unionists, Freemasons and people who tried to rescue Jews from slaughter.

A Facebook spokesman confirmed the ad was scrubbed from the platform because of the Nazi connection.

“We removed these posts and ads for violating our policy against organized hate,” the spokesman said. “Our policy prohibits using a banned hate group’s symbol to identify political prisoners without the context that condemns or discusses the symbol.”

Sen Klobachar is taking her name out of the VP running. 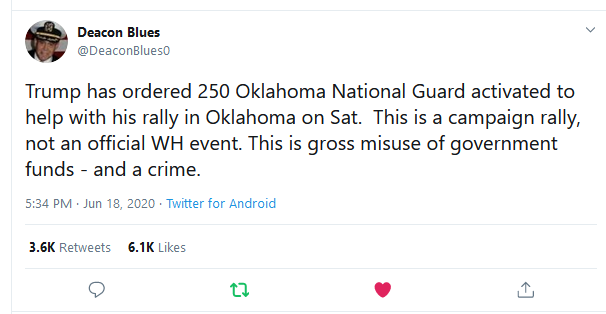 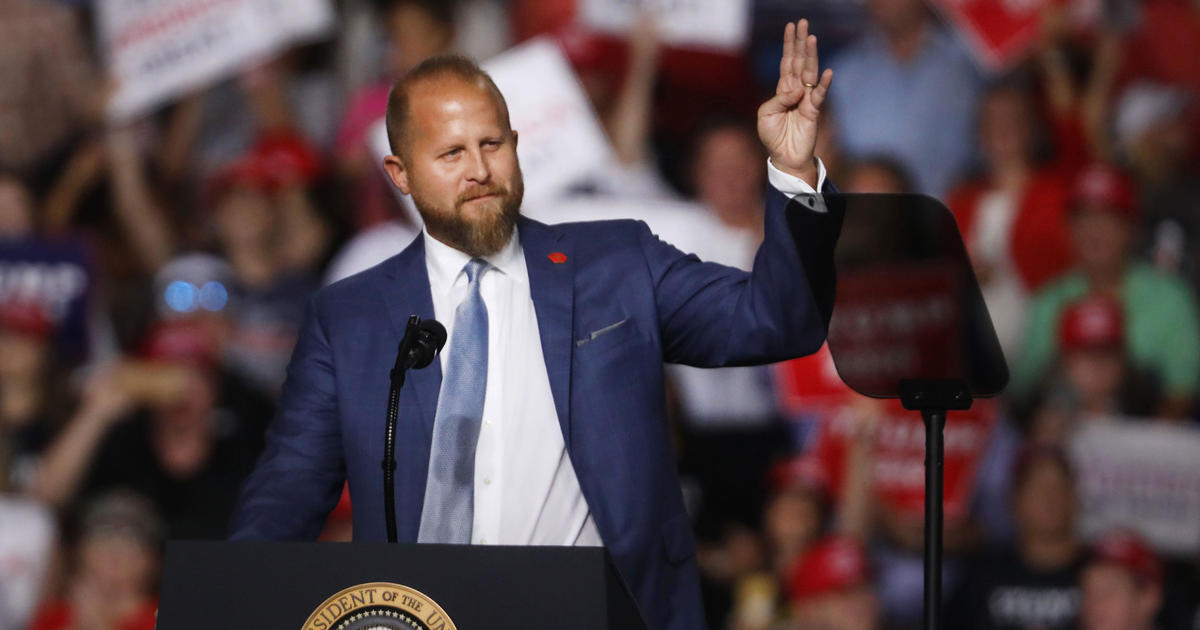 Brad Parscale, the president's 2020 campaign manager, did not cast a ballot in the 2016 presidential election.

Given that this interview talks about people who go to dozens of Trump rallies, I wonder how many attendees at these things are just the same people over and over? “It’s not going to touch you at the rally,” author Jeff Sharlet says of hardcore Trump supporters’ belief in the divinity and “spiritual protection” of a Trump rally against coronavirus, “You’ll be sort of magically protected.”

“He’s the Chosen One to Run America”: Inside the Cult of Trump, His Rallies Are...

Trump’s rallies—a bizarre mishmash of numerology, tweetology, and white supremacy—are the rituals by which he stamps his name on the American dream. As he prepares to resume them for the first time in months, his followers are ready to receive.

#file under Election 2020 maybe too @Pet_Proletariat and @MissJava… 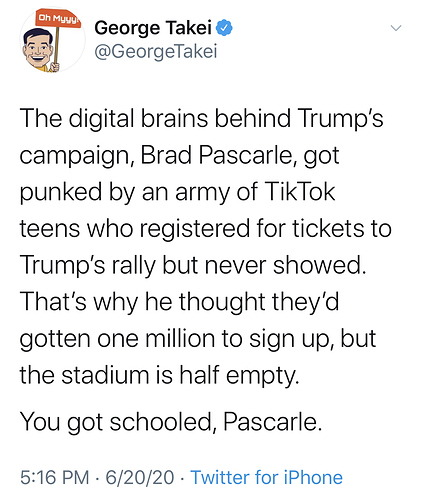 Cannot verify but I asked my teen and he said this is a thing the kids are doing as a prank, since most are under 18 and are not eligible to vote. 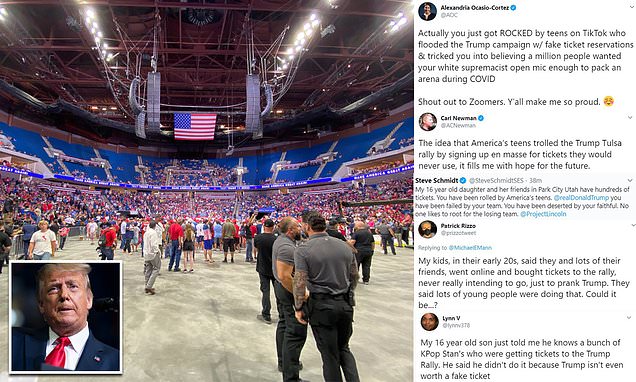 Political strategist Steve Schmidt tweeted on Saturday night: 'My 16 year old daughter and her friends in Park City Utah have hundreds of tickets. You have been rolled by America's teens.'

Teens and K-pop fans sabotaged Trump’s Tulsa rally by reserving tickets by the hundreds with no intention of attending, Twitter users claim

By Jenny Stanton For Dailymail.com

Teens reserved hundreds of tickets for Donald Trump’s Tulsa rally on Saturday night with no intention of attending, social media users have claimed.

Political strategist Steve Schmidt tweeted on Saturday night: 'My 16 year old daughter and her friends in Park City Utah have hundreds of tickets. You have been rolled by America’s teens.

‘@realDonaldTrump you have been failed by your team. You have been deserted by your faithful. No one likes to root for the losing team.’

He then added: ‘This is what happened tonight. I’m dead serious when I say this. The teens of America have struck a savage blow against @realDonaldTrump. All across America teens ordered tickets to this event. The fools on the campaign bragged about a million tickets. lol.’

It prompted US Representative Alexandria Ocasio-Cortez to praise the Zoomers and K-pop allies involved in reserving tickets.

The Oklahoma rally was intended to be the largest indoor gathering in the world during the coronavirus pandemic that has killed more than 120,000 Americans, put 40 million more out of work and upended Trump’s reelection bid.

Trump’s campaign, for its part, declared that it had received over a million ticket requests.

But in the hours before the event, crowds seemed significantly lighter than expected at the 19,000 seat BOK Center. Campaign officials scrapped plans for Trump to first address an overflow space

Brad Parscale, campaign manager for Trump’s 2020 campaign’s tweeted that ‘radical protestors… interfered with @realDonaldTrump supporters at the rally. They even blocked access to the metal detectors, preventing them from entering.’

Ocasio-Cortez responded: ‘Actually you just got ROCKED by teens on TikTok who flooded the Trump campaign w/ fake ticket reservations & tricked you into believing a million people wanted your white supremacist open mic enough to pack an arena during COVID Shout out to Zoomers. Y’all make me so proud.’

She added: ‘KPop allies, we see and appreciate your contributions in the fight for justice too.’

On Saturday, Trump tried to explain away the crowd size, blaming it on the media for declaring ‘don’t go, don’t come, don’t do anything’ while insisting there were protesters outside ‘doing bad things,’ though the small crowds of pre-rally demonstrators were largely peaceful.

‘We begin our campaign,’ Trump thundered. ‘The silent majority is stronger than ever before.’

The kids are alright. My teen is Gen Z and I have to say this generation is wicked smart. Imagine what these kids could do if we could actually give them a future. I’m not worried about the kids, I’m worried for them.

In high school I was class of 2000, I’m firmly a millennial and my experience has been 20 years of war, destruction of the natural environment, increased mass shootings, an unstable economy, mass unemployment, income inequality, massive housing shortages, poor health, police brutality, mass incarceration and now a global pandemic, killing thousands daily. There was one big bright spot in the middle but pretty much my generation has been gutted in the last 20 years. I worry constantly about what a mess we’re leaving for gen z. This is not a sustainable future for anyone.

Largest generational theft ever, even as we make up the majority of the workforce. Large pockets on the economy are just reach for most in our generation. When politicians talk about the middle-class, they mean millennials and gen x’ers by the millions. This theft will continue and it’ll be far each generation until it ends, unless we find a better way. 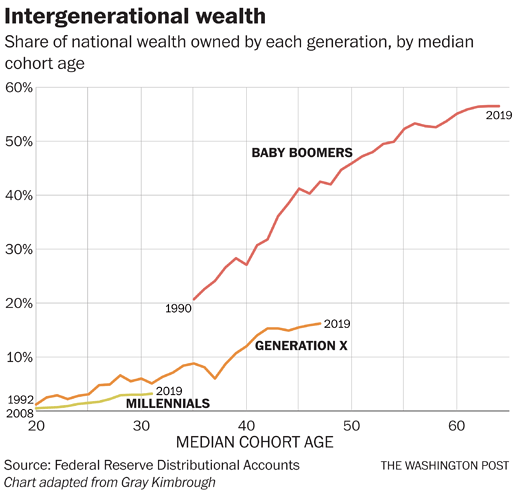 Analysis | The staggering millennial wealth deficit, in one chart

“You are all a lost generation".
–Gertrude Stein, in conversation

this generation is wicked smart. Imagine what these kids could do

I am glad this ploy worked and stuck it to the Idiot-boy-man.

My thoughts on this as an “OK Boomer” generation with enough idealism to get a start in this world are as follows.

The greater issues of personal safety, goodwill towards our fellow man, health for the earth, peace and the hope or just maybe a shred of evidence that this generation can make a difference is all that is needed. We’ve been in a feedback loop of rich are getting richer, poor are getting poorer, and the things that matter, health of ourselves and planet earth, education and well being of all is getting shunted by way of Corporate greed, politicians on the make and the evils of the less ‘democratic’ parts of the world.

Fear and ignorance do not make for progressive change. Getting signs that ‘hey, I can make a difference’ is a great start. Fighting for your beliefs is a democratic ideal. This upcoming generation can do that, should do that and create movement that can achieve change, but it has never been harder today with our divided/polarized/fearful country.

I’m sorry but this isn’t what is meant by democracy.

Kentucky cutting number of polling places for Tuesday’s primary from 3700 to 200 There will be one polling place for 616,000 registered voters in Louisville’s Jefferson County, where half state’s black voters live This is going to be a disaster

Kentucky braces for possible voting problems in Tuesday’s primary amid signs of high turnout
Trepidation about how pandemic-era voting will play out in Kentucky comes on the heels of troubled primaries around the country this spring.

Results are in on the Tulsa Rally- MeidasTouch does a “So far tonight I’m average.” 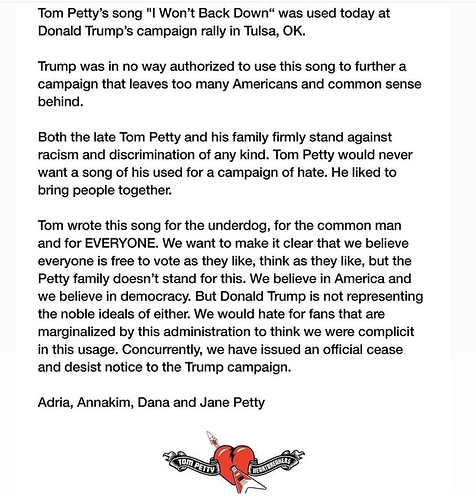 We can wait for the Rolling Stone comment on ‘You Can’t Always Get You Want.’ 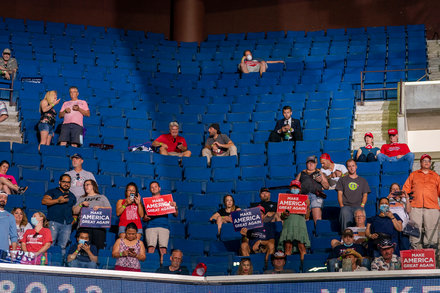 Wow! What a turn out! This is Bigly. 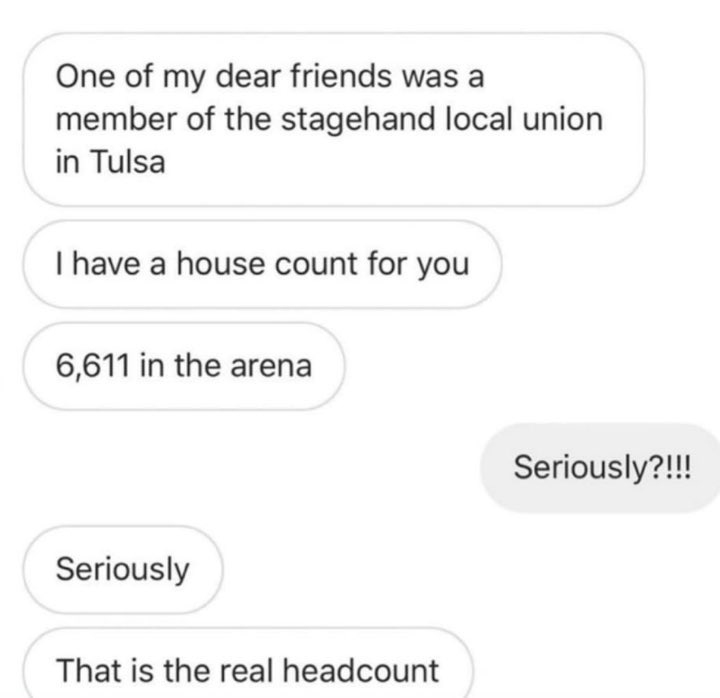 Andrew Little, the Public Information Officer for the Tulsa Fire Department, confirmed to Forbes on Sunday that a tally taken by the fire marshal clocked the turnout at just under 6,200 people, far fewer attendees than the campaign expected. 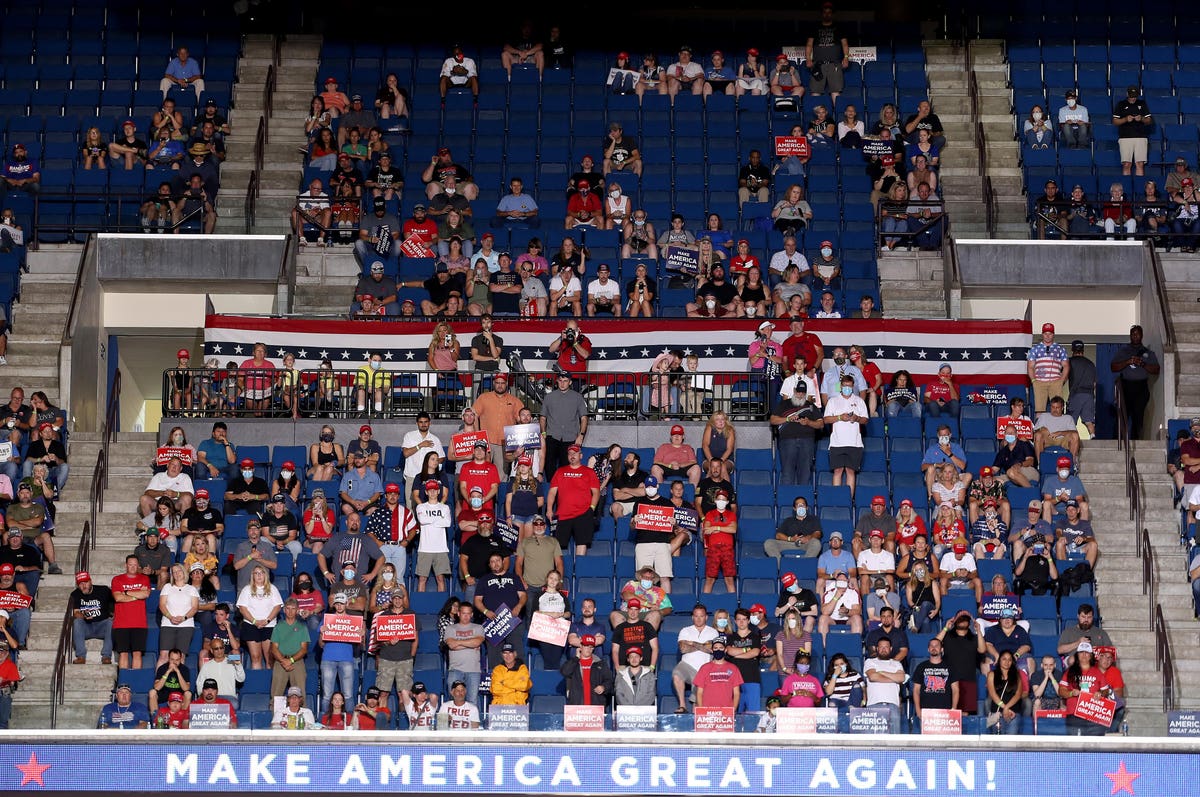 Turnout At Trump’s Tulsa Rally Was Just Under 6,200–A Fraction Of The Venue’s...

The campaign had anticipated turnout high enough to warrant a second speech to the overflow section.

The Lincoln Project turns out another good ad against T and for Biden…all based on ramp skills.