1/ Jeff Sessions fire Andrew McCabe, the now-former deputy director of the FBI, 24 hours before he was set to retire. Sessions announced the decision to fire McCabe just before 10 pm ET on Friday, saying McCabe was fired because he "made an unauthorized disclosure to the news media and lacked candor — including under oath — on multiple occasions." In an interview, McCabe defended himself. "The idea that I was dishonest is just wrong," he said. McCabe added: "This is part of an effort to discredit me as a witness" and undermine Robert Mueller's investigation into the Trump campaign. (New York Times / Washington Post)

74% is inaccurate. According to the poll, 60% of Americans believe that unelected, appointed officials have too much influence over policy. 14% “don’t know.” The headline lumps this 14% in with the 60%.

Unfortunately, the survey doesn’t really tell you much about the opinion of this 60%. The headline implies that this 60% believes that “deep state” actors are responsible. But you could hold this opinion if you think that Steve Bannon has (or had) too much influence over policy. He’s not “deep state” by any definition of the term.

McConnell’s silence speaks volumes about where he stands…which is behind the gold curtain pulling the levers. If there is a deep state you will find McConnell at the root of it.

Jeff Sessions says McCabe was fired because he “lacked candor — including under oath — on multiple occasions.”

The State of the State Department: It’s a Shambles

Friday night on The Rachel Maddow Show, Andrea Mitchell made some startling remarks about the dismal job Trump has done staffing the State Department. I told myself things couldn’t possibly be as bad as she described, but, yes indeed they are. Here’s the status of the top eight positions at State:

Trump has had more than a year to get this house in order, yet here we are. Four of the top positions are vacant, three are acting, and only one is confirmed, but that person is leaving. God help us if we face an international crisis that requires diplomatic expertise. Tom Shannon is one of the most senior and highly respected officials to leave the State Department in the past year. 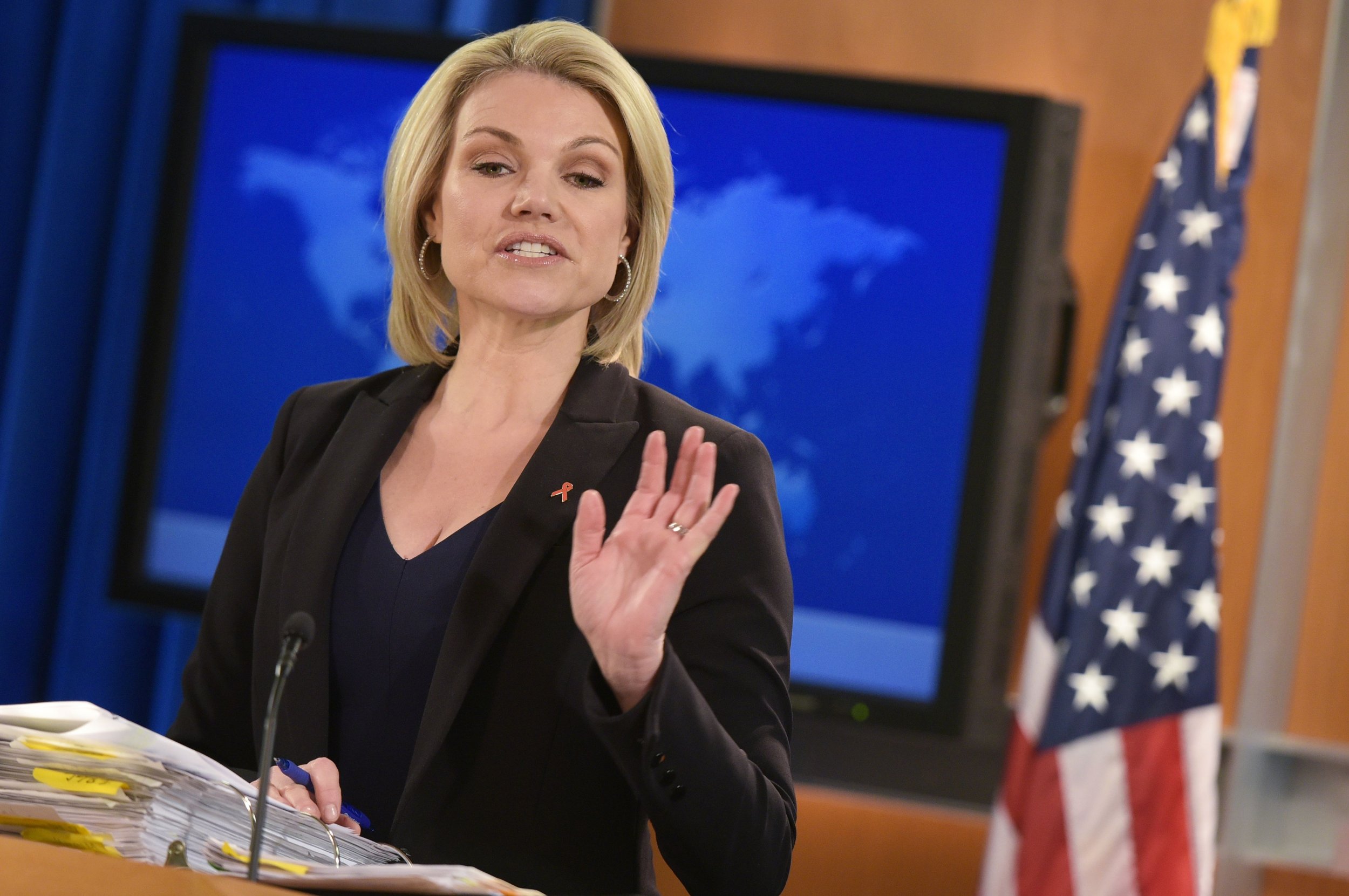 Before joining the Trump administration in April 2017, Nauert worked for Fox News.

The four vacant Under Secretary of State positions:

I can find almost no reporting on these positions. Here’s the State Department page that confirms they are vacant, but it includes no information about any steps being taken to fill them. If anyone finds some reporting on these vacant positions, please share. Thanks!

Welcome to state.gov. We recently modernized our website. Part of this modernization was to reduce the number of pages on the current state.gov website by not moving items that are in existence on our archive sites. This keeps the content on the...

So…how bad does it get before the entire machinery of government stops functioning?

Jeff Sessions fire Andrew McCabe, the now-former deputy director of the FBI, 24 hours before he was set to retire.

I don’t have any opinion on McCabe either way, but firing the man right before he retires and potentially costing him his pension for such flimsy reasoning is an outrageously petty dick move.

In the normal (pre-trump) world, when you care about the government & you care about the outcome of your actions, you take the time not only to carefully choose the right employees for positions, but you also make sure that out-going personnel help to train their replacements to allow for a seamless transition to the job they’re doing. Does any of that sound like the trump method? I don’t think so either. We now have positions either vacant or staffed by the incompetent, thanks to the GOP & trump.
This is a slow-motion over-throw (like the Johnny Cash song, “I got it one piece at a time…”) of our government & of the rule of law.

I don’t have any opinion on McCabe either way, but firing the man right before he retires and potentially costing him his pension for such flimsy reasoning is an outrageously petty dick move.

trump had been bad-mouthing McCabe for a long time, & it didn’t stop even when he stepped down. It has been trump’s calculation (yes, some of his impulsiveness is fake) to discredit all the witnesses that corroborate Comey’s version of events. This firing was clearly political, did not in any way follow traditional due process for such a termination, and adds more bricks to the “obstruction of justice” wall.
Also, trump enjoys being a dick.

BREAKING NEWS: V Putin was re-elected President of Russia over the weekend in an election in which ballet box stuffers were recorded on camera. WTF

Well, I am just totally gobsmacked!

A 13 YO in Missippi shot by accident his 9 YO brother thinking the gun was a toy. The brother was killed. I cannot imagine the anguish this would cause a family.

Good thing we have such a respected and law abiding President.

I cannot imagine the anguish this would cause a family.

Well I can imagine it…I’d just rather not. This kind of thing happens all too often when people have guns and kids in the same house. When that 9 year old grows up, imagine the burden of guilt he’ll be carrying. Actually, it’s often a much-younger child this happens with too…9 is pretty aware. Geez.

How do you arrive at that given the data I just showed you? Honestly confused at why there is confusion.

On McCabe: foolish of the man to tempt fate a year out from retirement. On the other hand, ANYONE in the Trump organization accusing McCabe if ‘lying’ for a better word is just a little over the top! The congressman who will offer him a job for two years - sign that guy up for a position in the next Democratic cabinet!
On Meuller: he is heading into the Trump headwinds now. As I see it - if Trump goes after him-he’s out. If he doesn’t go after him-he’s out by impeachment or obstruction of justice. He’s screwed - and I don’t mean in the Stormy Daniels way!

I agree, and Jeff “I Don’t Recall” Sessions accusing McCabe of “a lack of candor” is especially rich.

Everything Jeff Sessions Has Forgotten Under Oath

Over the course of four recent congressional hearings, Attorney General Jeff Sessions has somehow forgotten dozens of people, places, and events. Here's all of them in one place.

I hope he took up the Democrat congressman on his offer to employ McCabe as a way for him to likely be able to keep his pension.

Because I think there’s too much grey and variation in the notion or concept of “probably.”

If you read the Monmouth press release, it’s eminently clear that poll officials have slanted the results, albeit not necessarily on purpose. Indeed, for what reason they’ve pursued this idiotic strategy I can’t say, but I will guarantee you this: Suggesting that 70% of Americans believe in something that Trump has been using as an evasive contrivance for months is a very dangerous proposition. You know as well as I do that Trump will grab any little tiny fact that has the slightest odor of confirmation and blast it all over his Twitter feed as proof of his righteousness and divinity. And Monmouth officials just handed him a damn megaphone:

Listen to this quote from the Monmouth press release:

“Few Americans (13%) are very familiar with the term “Deep State;” another 24% are somewhat
familiar, while 63% say they are not familiar with this term. However, when the term is described as a group of unelected government and military officials who secretly manipulate or direct national policy, nearly 3-in-4 (74%) say they believe this type of apparatus exists in Washington. This includes 27% who say it definitely exists and 47% who say it probably exists. Only 1-in-5 say it does not exist (16% probably not and 5% definitely not). Belief in the probable existence of a Deep State comes from more than 7-in-10 Americans in each partisan group, although Republicans (31%) and independents (33%) are somewhat more likely than Democrats (19%) to say that the Deep State definitely exists.”

"A group of UNELECTED government and MILITARY officials who SECRETLY MANIPULATE or direct national policy . . . " Oooh, that sounds so sexy! Do you believe it might be true? Given the size of the government, and the relative sliver of people who have to be elected to get their jobs, could the country truly function any other way?

But did the Monmouth officials explain to all these people who never heard the term or were only vaguely familiar with it that Donald Trump has been using “Deep State,” beating it like a dead horse, to evade responsibility for anything and everything his administration has been up to since the inauguration? Anything for which a man with integrity would simply repeat the Truman motto about “The buck stops here,” meaning with the President, for whatever ills had befallen his or her Administration, but inot Trump. Instead, he blames it all on the “Deep State,” that any behavior or event he wants to avoid accountability for, he blames on Obama, who, obviously, is no longer in office, so how can Trump keep blaming him? By using the “Deep State” dodge, that all the people beholding to Obama and HRC are still around and they’re actively trying to undermine Trump. If Monmouth officials had added that description to their explanation of “Deep State,” and why it’s even a relevant term at the moment, this 70% figure would drop to 20-30% in a heartbeat.

Mark my words. You will see Trump tweeting in the next few days, if not tonight, about Americans overwhelming believing in the Deep State and confirming Trump’s innocence of everything.