1/ The House Intelligence Committee found "no evidence that the Trump campaign colluded, coordinated, or conspired with the Russian government" in the 2016 election. The 253-page report criticized both the Trump and Hillary Clinton campaigns for "poor judgment and ill-considered actions" in their dealings with Russia-related figures. Democrats on the committee accused the Republicans of prematurely closing the investigation in a "a systematic effort to muddy the waters and to deflect attention away from the President" and asserted that Trump associates willingness to accept Russian assistance suggest "a consciousness of wrongfulness, if not illegality." The report accused the intelligence community of "significant intelligence tradecraft failings," suggesting that Russia's main goal was to sow discord in the United States and not to help Trump win the election. (New York Times / Washington Post / Politico)

I’m just starting to go through the report now. I’ll probably post a few bullets and summaries of the findings later today, but I’ll need some help from the WTFJHT crew to suss out all the important details.

Who’s down to dig in with me?

Link to PDF of the full report: https://intelligence.house.gov/uploadedfiles/hpsci_-_declassified_committee_report_redacted_final_redacted.pdf

Also, I’m sure @matt will eventually merge this with the main thread for Day 463 but I’m pretty sure he’s either still sleeping or just waking up, so this will have to do for now.

WTF? They want get rid of the law Flynn and Manafort are accused of breaking?

This whole report reeks, wish I had more time this morning to help peel this onion. Good luck!

Quote -
Pg 101 - “Further as of Dec 5, 2016, the administration had not acknowledged any attempt by Russia to influence the election in favor of candidate Trump.”

Yes, an instance where they are putting a spotlight on Obama and what he did not do to STOP the Russian interference of the election. Although, quietly there was already an FBI investigation during the Trump campaign, as well as on Manafort, etc now we know Michael Cohen.

Obama just was not going to announce it.

I think he was trying to use the basketball emoji to clumsily convey “it takes balls”, not in the racist “black people = basketball” sense.

Not that I don’t think his comments aren’t offensive and/or racist for other reasons, though.

Yeah I took it as him adding “BALLIN’” or something along those lines. At the same time, tho… dude. Situational awareness lol

“He confusingly included basketball emojis in his tweet.” Well, he didn’t have many choices. Personally, I’m pretty glad actual testicle emoji aren’t a thing. I guess he could have used eggs? 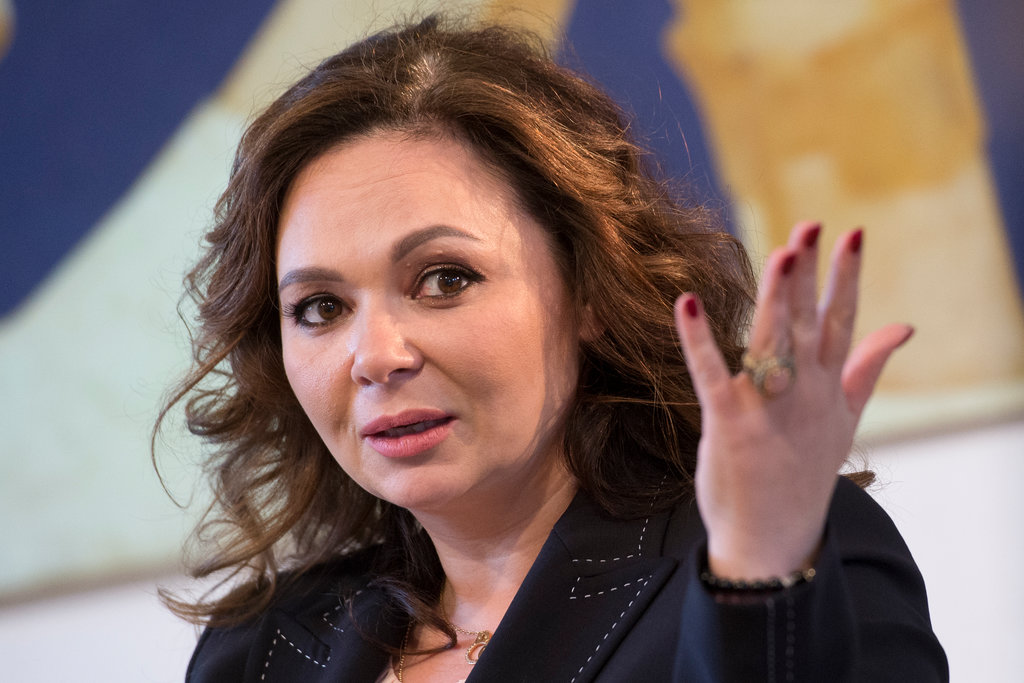 Lawyer Who Was Said to Have Dirt on Clinton Had Closer Ties to Kremlin Than...

Newly released emails have renewed questions about who the lawyer, Natalia V. Veselnitskaya, was representing when she met with top Trump campaign officials promising dirt on Hillary Clinton.

This is stunning on its own, but even more importantly, it is yet another example of why the House Intelligence Committee should be shamed for abandoning its investigation and issuing its “final report.” How could they legitimately claim that all the critical intel on collusion has been gathered? Almost every day, new evidence is being released that corroborates collusion by the Trump campaign. Yet Nunes & Co. keeps telling us, “That’s it. Nothing to see here. It’s all over. Return to your accommodation units.”

A lawsuit filed by an adult-film actress over an alleged “hush money” deal with President Donald Trump and his attorney Michael Cohen will be put on hold for three months because of a criminal investigation Cohen is facing, a federal judge ruled on Friday.

U.S. District Court Judge S. James Otero said it appeared “likely” that Cohen would be indicted in connection with the ongoing investigation, which led to search warrant raids on Cohen’s home, office and hotel room in New York earlier this month. 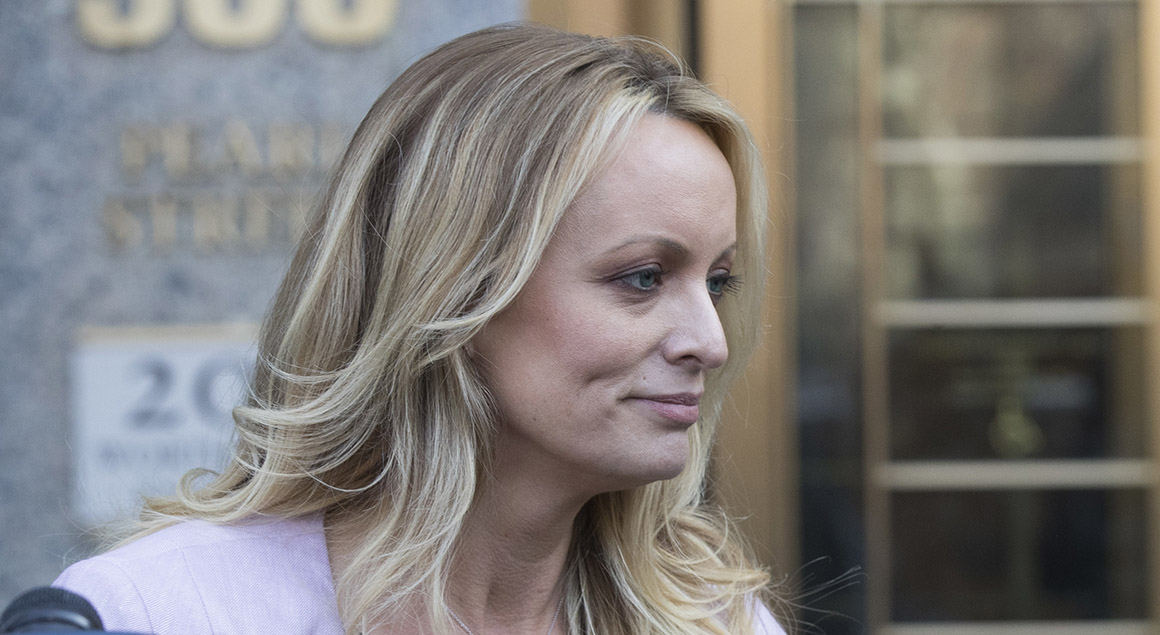 Trumps a dumb ass. Just sayin. He can tweet whatever he thinks so “heh”” I can call him a dumb ass.

With no scientific evidence other than observation.

Why did Republicans want to remain willfully ignorant of a call Don Jr. had while setting up the Trump Tower meeting?

Emphasis below is mine.

. . . Right after Trump Jr. set up the specifics of the [Trump Tower] meeting, he had two calls with a number in Russia belonging to Emin Agalarov. Between those two calls . . . Trump Jr. received a third call from a blocked number. Who might it have been?

Democrats wanted to find out, but Republicans blocked it from happening, according to the Democrats’ response.

“We sought to determine whether that number belonged to the president, because we also ascertained that then-candidate Trump used a blocked number,” Schiff said during our interview. “That would tell us whether Don Jr. sought his father’s permission to take the meeting, and [whether] that was the purpose of that call.”

Schiff added that Democrats asked Republicans to subpoena phone records to determine whose number it was, but Republicans “refused,” Schiff said. “They didn’t want to know whether he had informed his father and sought his permission to take that meeting with the Russians.” . . .

If Trump Jr. did inform his father of the meeting in between calls with Emin Agalarov, it would be absolutely explosive news. First, it would mean the president has lied about his knowledge of the Trump Tower meeting. Second, it would show he was an active participant in a manner of speaking, though he wasn’t in the room.

If the Democratic response is accurate, what we know is that Republicans didn’t want to find out one way or the other.

If the Democratic response is accurate, what we know is that Republicans didn’t want to find out one way or the other.

Agree with this, as do a lot of the legal pundits who line up the potential calls Junior may have made. Yes, this House panel stops short at every juncture it can -in a really infuriating way.

Blocked number, T has one…oh, wonder if they would call him.

Same adage they say that Putin is after…always looking for ‘plausible deniability.’ The R house members would say, well we did not see a need to pursue it any further, we have done our investigation and found nothing. An abominination really.

To many there is a large enough gaping hole to not be the last word.

Here is another long thread presented by Seth Abramson, lawyer who follows this closely. He breaks down the House Committee Intelligence Report with a timeline.

"THREAD) There are bombshell revelations deeply damaging to Trump in the just-released HPSCI report written by Trump’s allies and agents in the House. This thread discusses them via a deep dive into the timeline of events the GOP now seeks to obscure. Hope you’ll read and share.

Sessions’ testimony confirms he discussed Ukraine (sanctions) with Kislyak in his secret meeting of September 8, 2016—the one he lied to Congress about. But we didn’t know until now that the intelligence community had told him 22 days earlier that Russia was an active threat.

So Trump’s top national security advisor was told Russia was an active threat against the US and almost immediately thereafter set up a secret meeting with the Russians, which he later lied about under oath. During the secret meeting he discussed sanctions policy with Russia.

George Papadopoulous told a major Greek newspaper, Kathimerini, that he had a private meeting with Trump before he was named to Trump’s NatSec team on March 21, 2016. We now know, thanks to the HPSCI report, that Papadopoulos was already on the team by March 14—a critical date.

Trump choosing Papadopoulos to be the only member of his new NatSec team he personally vouched for bolsters Papadopoulos’ claim that a pre-March 21, 2016 meeting occurred between Trump and Papadopoulos—but that fact now presents a major (in fact bombshell-level) danger for Trump.

If the Trump-Papadopoulos one-on-one meeting happened after March 14, 2016 but before March 21, the chances are extremely high that Papadopoulos told Trump that he had made contact with a Kremlin agent—Joseph Mifsud—and that this is why Trump personally praised him on March 21.

We already know Papadopoulos was willing and eager to talk with Trump and the NatSec team about his contact with Russia; after several members of the team lied to the press about it, it was revealed that Papadopoulos did in fact make this revelation to the team on March 31, 2016.

We know that Trump exhibited no surprise when he “learned” on March 31, 2016 that Papadopoulos had made contact with the Russians. That, along with the other evidence, suggests a meeting between the two men between March 14 and March 21 had already given Trump this information.

That the HPSCI report says a top Trump aide praised Papadopoulos—right after his Mifsud meeting—for making contact with Russia further suggests the information was passed on to Trump. So Trump knew of contact between his campaign and Russia earlier than anyone has ever reported." 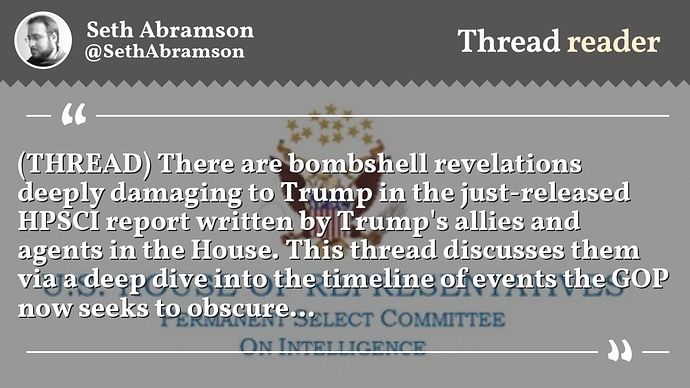 Thread by @SethAbramson: "(THREAD) There are bombshell revelations deeply...

Thread by @SethAbramson: "(THREAD) There are bombshell revelations deeply damaging to Trump in the just-released HPSCI report written by Trumagents in the House. This thread discusses them via a deep dive into the timeline of events the GOP now seeks...

@dragonfly9
Hmmm, I would take what Seth Abramson says with a grain of salt. He’s kinda a conspiracy theorist…

I would take what Seth Abramson says with a grain of salt. He’s kinda a conspiracy theorist

Yes. Life gets better when you unfollow that shit.

Ok…roger that. I don’t go verbatim with these guys…but I was trying to look for timeline narratives.

My bad. @matt and @Pet_Proletariat

My issue with Seth Abramson is that he’s not an investigative journalist. He’s an arm chair theorist with an ample Twitter following and that’s fine, people can do that all they want. I just wouldn’t call him a news source.

Yes, you got it! How do I say this nicely… He’s Twitter pundit, that peddles in political theory.

Thank you, sometimes I’m the typo-queen.