1/ House Freedom Caucus leaders introduced articles of impeachment against Deputy Attorney General Rod Rosenstein. Reps. Jim Jordan and Mark Meadows introduced the articles of impeachment. "The DOJ is keeping information from Congress. Enough is enough," Jordan said in a statement. "It’s time to hold Mr. Rosenstein accountable for blocking Congress’s constitutional oversight role." The resolution is unlikely to pass, as top GOP lawmakers have not signed on to the effort, but it represents the strongest step that conservative allies of Trump have taken so far in their feud with Rosenstein and the Justice Department. (Politico / CNN / Washington Post)

3/ The White House banned network pool reporter Kaitlan Collins from the Rose Garden because of the questions she asked Trump during a photo op. In a statement, Sarah Huckabee Sanders confirmed the dis-invitation, claiming that Collins “shouted questions and refused to leave despite repeatedly being asked to do so.” Sanders continued: “To be clear, we support a free press and ask that everyone be respectful of the presidency and guests at the White House.” (CNN)

Other reporters who were in the room said Collins was perfectly respectful.

Trump didn’t answer, so Collins changed subjects. She asked, “Why is Vladimir Putin not accepting your invitation, Mr. President?”

2/ The government seized more than 100 recordings from Michael Cohen

There’s good news and bad news here. The good news is, of course, that there are 100 recordings. The bad news is that the one tape we’ve already heard may be the only tape in which Trump has a substantive conversation.

The government has seized more than 100 recordings that Cohen made of his conversations with people discussing matters that could relate to Trump and his businesses and with Trump himself talking, according to two people familiar with the recordings. Cohen appeared to make some recordings with an iPhone — without telling anyone he was taping them.

A significant portion of the recordings is Cohen surreptitiously recording reporters who met with or questioned Cohen about Trump during the campaign and after Trump’s election, the people said.

Trump’s voice is on several of the recordings, but only in snippets — typically when he is returning a call from Cohen or asking Cohen on a voice-mail message to call him back, the people said. The only recording in which Trump and Cohen have a substantive conversation is the one that Davis released Tuesday, according to these people.

Mmmm . . . Well, here’s hoping the sources are mistaken on this point. 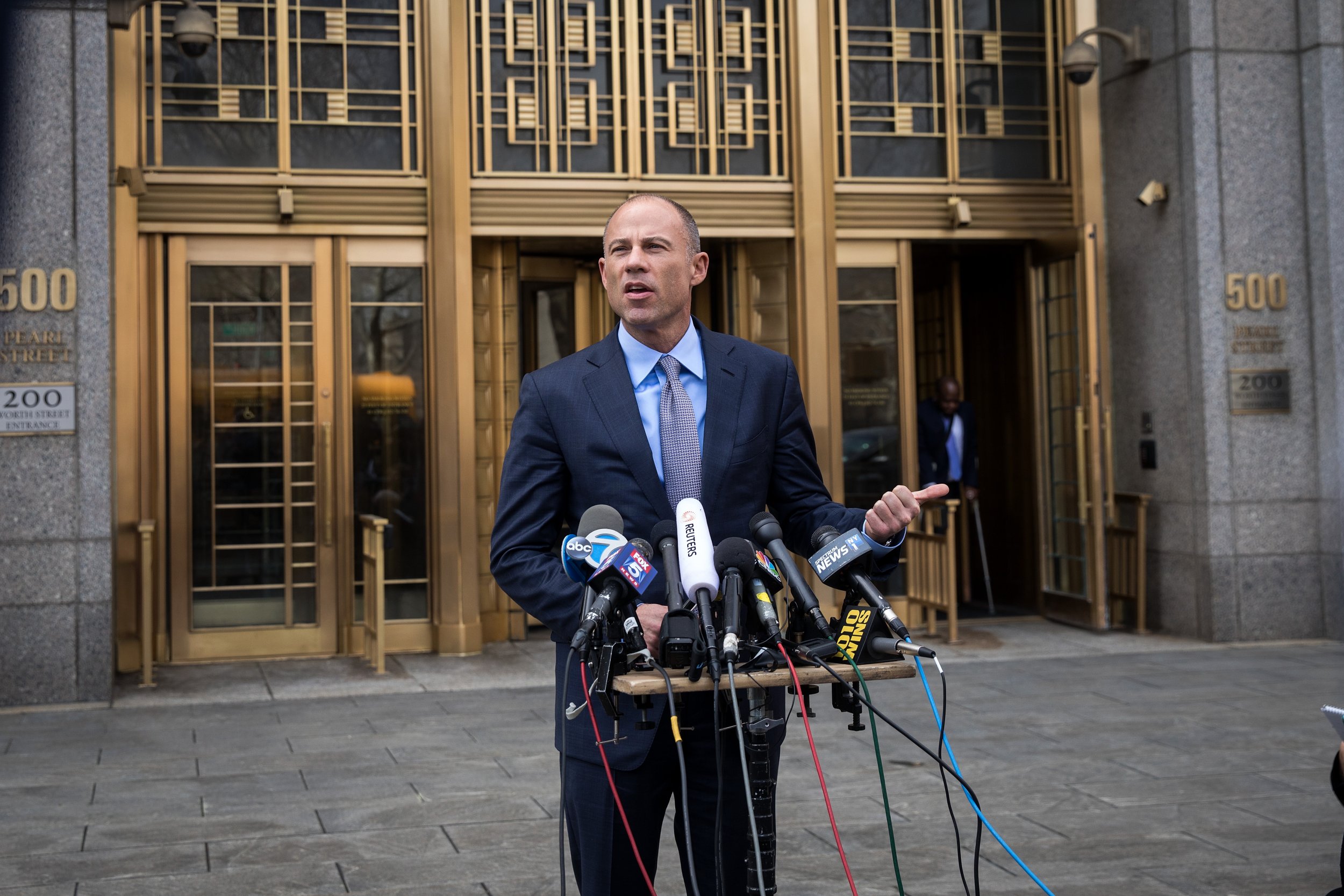 Michael Avenatti claims Trump and Cohen were "concerned about a pregnancy,"...

"Cohen has evidence and info in his possession and it must be released to the public. Now!" Avenatti tweeted.

I harbor some doubts about Avenatti’s motivations, but he does seem to have a good track record for predicting new evidence that soon drops – so it may be worth paying attention to his latest claim – with the caveat that it’s not news 'till it’s news.

“Breaking: Donald Trump conspired with Michael Cohen to pay off multiple other women prior to Election Day in 2016. They were also concerned about a pregnancy,” Avenatti tweeted early Thursday. “Cohen has evidence and info in his possession and it must be released to the public. Now! #Basta.”

A Twitter user replied, asking, “Why is this breaking now … did you receive new evidence?”

Avenatti answered in the thread, “Yes,” and added: “And for the haters out there, check my track record. I don’t make claims that are nonsense.” 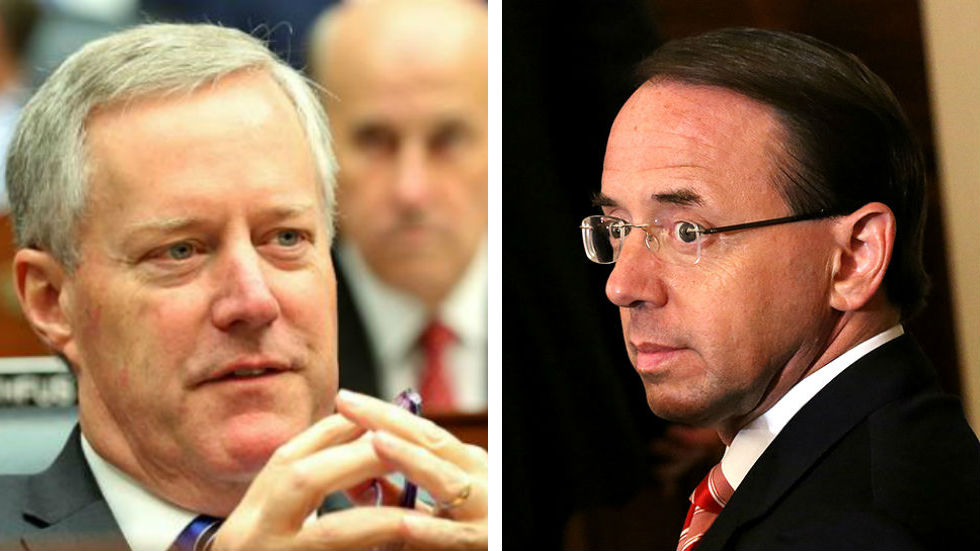 Rep. Mark Meadows (R-N.C.) says he is tabling his efforts to impeach Deputy Attorney General Rod Rosenstein after having several meetings with Republican leadership, stating that he would instead pursue contempt if the Justice Department (DOJ) does not turn over documents Congress is seeking.

That didn’t last long – not even one full day. 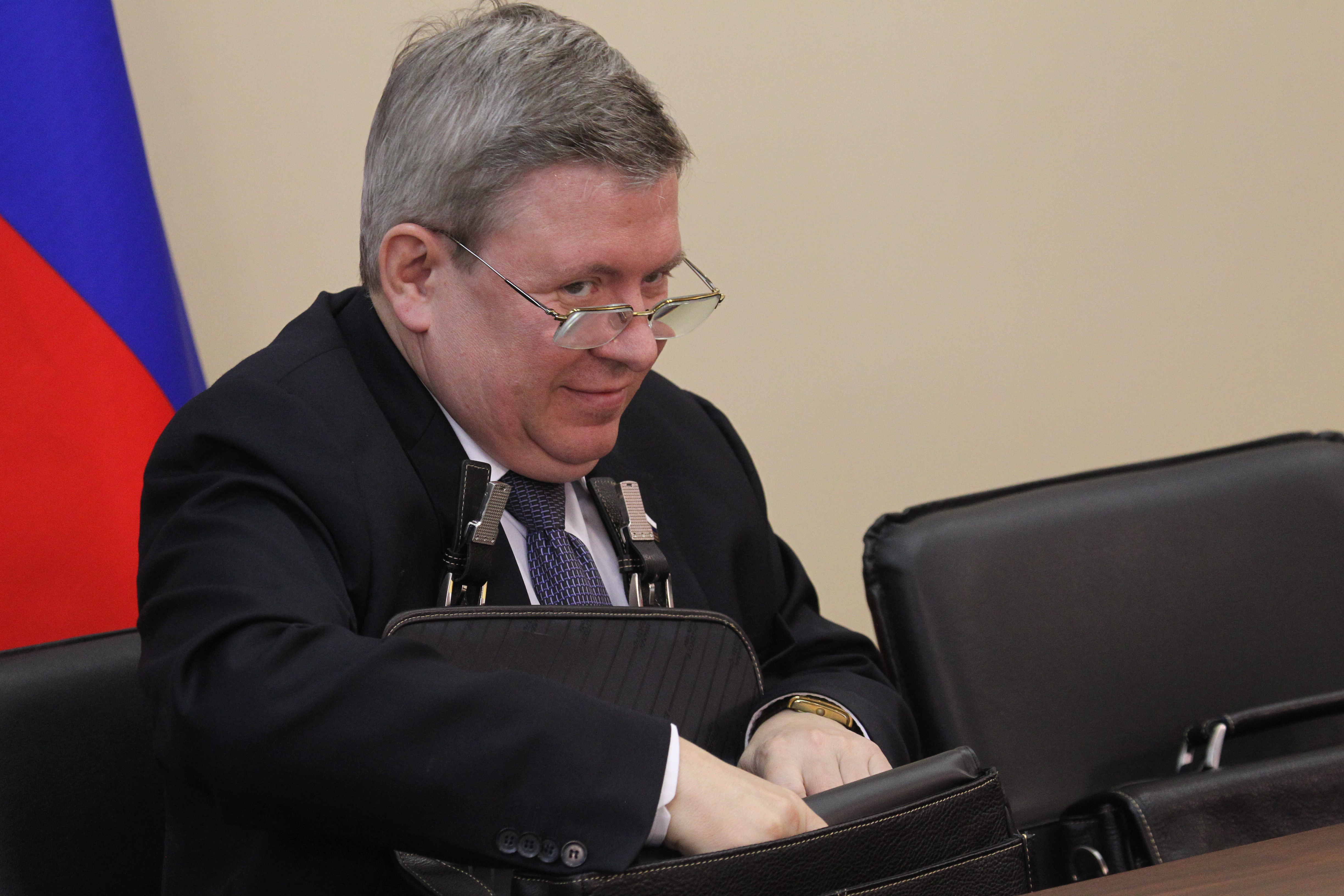 George O'Neill has a history of pro-Kremlin statements, and a range of conspiratorial views.

This is a fine piece of in-depth journalism from Think Progress.

Here’s WSJ’s confirmation of the identity of Person 2 that was published a few hours after the Think Progress article. (Note: WSJ requires a subscription.)

Sen. Claire McCaskill is a top target for Republicans looking to grow their slim Senate majority in 2018. Turns out, Russia’s “Fancy Bear” hackers are going after her staff, too.

Yes, it’s true, the Russians are attacking our mid-terms – and, of course, they’re going after a Democrat.

Some walk back on the impeachment of Rod Rosenstein. It was a move meant to show loyalty to T…and would never pass I am gathering.

Rep. Mark Meadows (R-N.C.) says he is tabling his efforts to impeach Deputy Attorney General Rod Rosenstein after having several meetings with Republican leadership, stating that he would instead pursue contempt if the Justice Department (DOJ) does not turn over documents Congress is seeking.

While the impeachment option remains on the table, Meadows told reporters Thursday he now hopes it will be a contempt process rather than impeachment.

Some walk back on the impeachment of Rod Rosenstein. It was a move meant to show loyalty to T…and would never pass I am gathering.

I don’t think I’m the only one who has had more than enough “political theater” to last a lifetime.
The dishonesty is way over the top.

Folks online are calling this censorship, I’m inclined to not call it censorship because the content posted does not comply with YouTube’s user agreement. What do you all think? 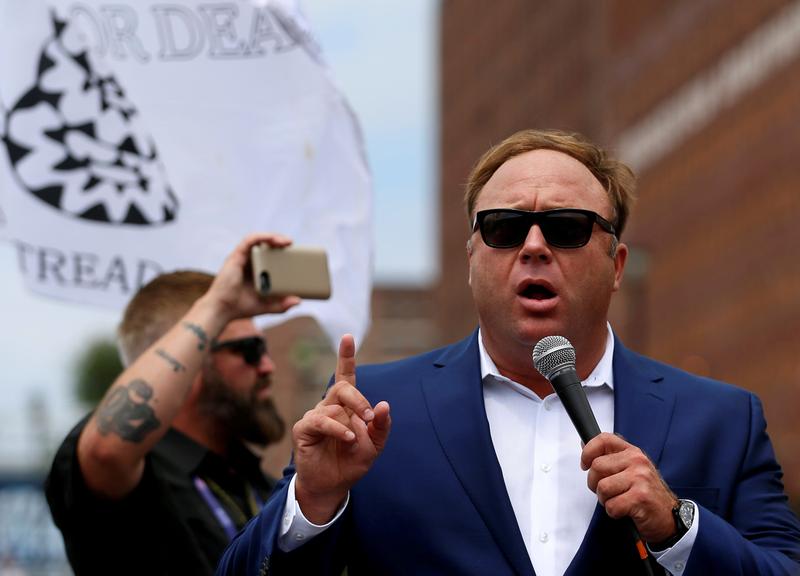 YouTube has removed four videos by conspiracy theorist Alex Jones, his website Infowars said on Wednesday, after the radio host used his YouTube channel to denounce Muslim immigrants to Europe and the creators of a transgender cartoon.

more than enough “political theater” to last a lifetime.

I’ll happily send ol’ Alex a crying towel…
The issue of censorship is SO sticky but look where the “hate-speech” is getting us, & if it violates YouTube’s user agreement, well, hooray!

The Mueller probe is being discussed today re: T’s tweets and the bullying nature of them towards Comey, Sessions. Not sure how this angle is being promoted (ie, Bullying nature of Tweets) whether T staff/Guliani are trying to get out in front about this obstruction angle.

None of what Mr. Mueller has homed in on constitutes obstruction, Mr. Trump’s lawyers said. They argued that most of the presidential acts under scrutiny, including the firing of Mr. Comey, fall under Mr. Trump’s authority as the head of the executive branch and insisted that he should not even have to answer Mr. Mueller’s questions about obstruction.

But privately, some of the lawyers have expressed concern that Mr. Mueller will stitch together several episodes, encounters and pieces of evidence, like the tweets, to build a case that the president embarked on a broad effort to interfere with the investigation. Prosecutors who lack one slam-dunk piece of evidence in > obstruction cases often search for a larger pattern of behavior, legal experts said.

If you’re going to obstruct justice, you do it quietly and secretly, not in public,” Mr. Giuliani said.

Mr. Giuliani was referring to more typical obstruction cases, where prosecutors focus on measures taken in private, like bribing witnesses, destroying evidence or lying under oath. While some of Mr. Trump’s private acts are under scrutiny, like asking Mr. Comey for loyalty, his public conduct is as well. That sets this investigation apart, even from those of other presidents; Richard M. Nixon and Bill Clinton were accused of privately trying to influence witness testimony.

But as in those cases, federal investigators are seeking to determine whether Mr. Trump was trying to use his power to punish anyone who did not go along with his attempts to curtail the investigation. 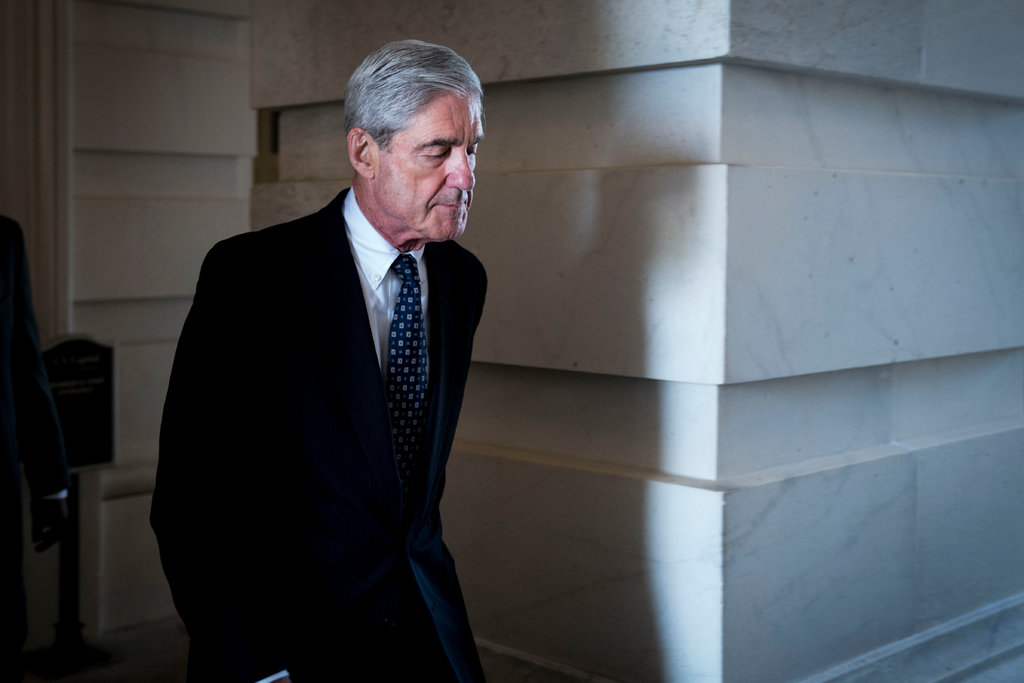 The president’s public attacks on Jeff Sessions and James Comey, which came as he was also privately pressuring them, are being scrutinized.

WTF Just Happened Today?
Day 553: “Enough is enough.”
Today in one sentence: House Freedom Caucus leaders introduced articles of impeachment against Rod Rosenstein, which Paul Ryan immediately shot down; Mueller is scrutinizing Trump’s tweets as part of his obstruction of justice investigation; a federal grand jury subpoenaed the CFO of the Trump Organization; and the lawyer who Trump Jr. met with at Trump Tower during the campaign worked more closely with Russian government officials than she previously let on.

Shoutout to Joe, host of the WTFJHT podcast, for stepping in and writing today’s update for me at the last minute. I had some personal life things pop up today that needed my attention. While everything worked out today, it’s a good reminder that I can’t do this alone and I need to surround myself with more help. More on this soon!

@jamditis Shouting out to you and @matt for always digesting this whirling mass/mess of news today and all the other days. You guys are rock-solid-committed to getting out this digested news synopses. Big thanks~

trump & his allies seem to believe that just because he spews this garbage in public that it can’t be obstruction & witness intimidation, etc. I think (& hope) he is very much mistaken. Especially because there is such a mountain of evidence, and I think the law books of the future will have lots of fun with all this…just wish it was “fun” now…

Needless to say, I think it “all counts”.

does not comply with YouTube’s user agreement

It is meant to be malicious, mean spirited and incite a lot of bad responses, because it is malicious and mean spirited. We do not need more of this conspiracists mayhem. Am glad it does not fall within YouTube’s guidelines. 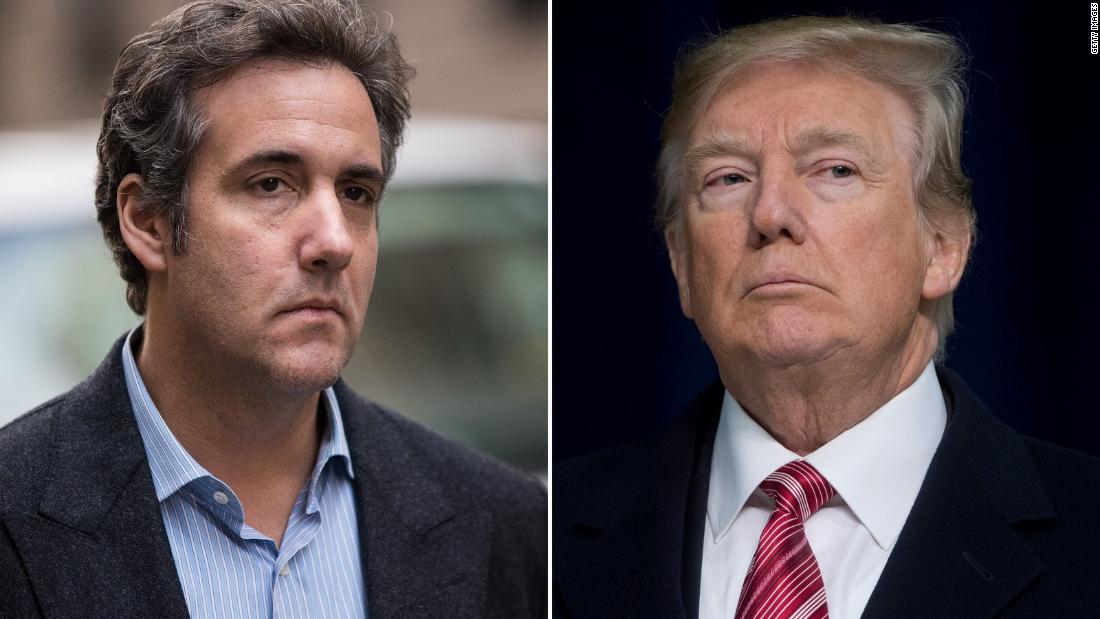 Michael Cohen, President Donald Trump's former personal attorney, claims that then-candidate Trump knew in advance about the June 2016 meeting in Trump Tower in which Russians were expected to offer his campaign dirt on Hillary Clinton, sources with...

If true, this is something that could finally have some real consequences for Trump.

Michael Cohen, President Donald Trump’s former personal attorney, claims that then-candidate Trump knew in advance about the June 2016 meeting in Trump Tower in which Russians were expected to offer his campaign dirt on Hillary Clinton, sources with knowledge tell CNN. Cohen is willing to make that assertion to special counsel Robert Mueller, the sources said.

Cohen alleges that he was present, along with several others, when Trump was informed of the Russians’ offer by Trump Jr. By Cohen’s account, Trump approved going ahead with the meeting with the Russians, according to sources.

To be clear, these sources said Cohen does not have evidence, such as audio recordings, to corroborate his claim, but he is willing to attest to his account.

Speculation as to whether Trump’s group revealed this.

Or that if Cohen try to plea bargain this (with Mueller) the info would never let that info out. 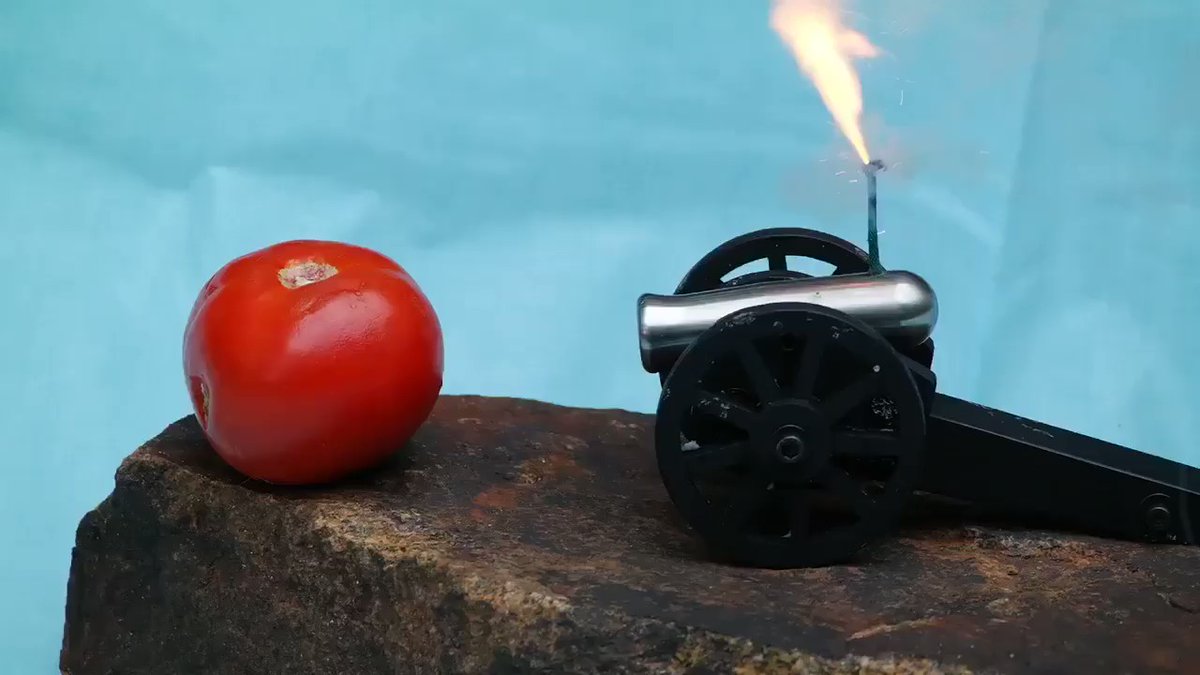