This thread has ended. The discussion continues: The Latest - Tuesday, December 22

Barr takes his stand against Trump’s attempt to overturn the election and have a special counsel appointed. Last ditch effort for Barr to salvage his already burnished reputation.

The comments came at what is likely to be Barr’s last news conference as attorney general.

Outgoing Attorney General William P. Barr said Monday that he saw no basis for the federal government seizing voting machines and that he did not intend to appoint a special counsel to investigate allegations of voter fraud — again breaking with President Trump as the commander in chief entertains increasingly desperate measures to overturn the election.

At a news conference to announce charges in a decades-old terrorism case, Barr — who has just two days left in office — was peppered with questions about whether he would consider steps proposed by allies of the president to advance Trump’s claims of massive voter fraud.

Barr said that while he was “sure there was fraud in this election,” he had not seen evidence that it was so “systemic or broad-based” that it would change the result. He asserted he saw “no basis now for seizing machines by the federal government,” and he would not name a special counsel to explore the allegations of Trump and his allies.

WE HAVE BILL TEXT. And I don't. Have words. This bill is 5593 pages long. Here is the link: rules.house.gov/sites/democrat…

CARES ACT - a lot of Republican attachments, reading about the 3 martini lunches approved as a business expense. See comments about Tibet below.

Among the things I notice right away in the megadeal table of contents: "Horseracing Integrity and Safety". (It helps to be GOP Senate leader.)

BIG DEAL ON TIBET/CHINA. This bill directs the secretary of state to establish a U.S. consulate in Tibet. That reads like a direct move against China.

This bill is beyond. Example: It literally legislates the process for the reincarnation of the Dalai Lama. See pg 5099 of the PDF.
2 Likes
Windthin (David Bythewood) December 21, 2020, 7:17pm #4

First toilets, then showers, and now Trump weighs in on another great topic of the era: architecture.

INBOX: @realDonaldTrump has signed an executive order prohibiting new federal buildings from being built in anything other than Neoclassical, Georgian, Federal, Greek Revival, Beaux-Arts, or Art Deco styles. https://t.co/gPbaYk9yEe 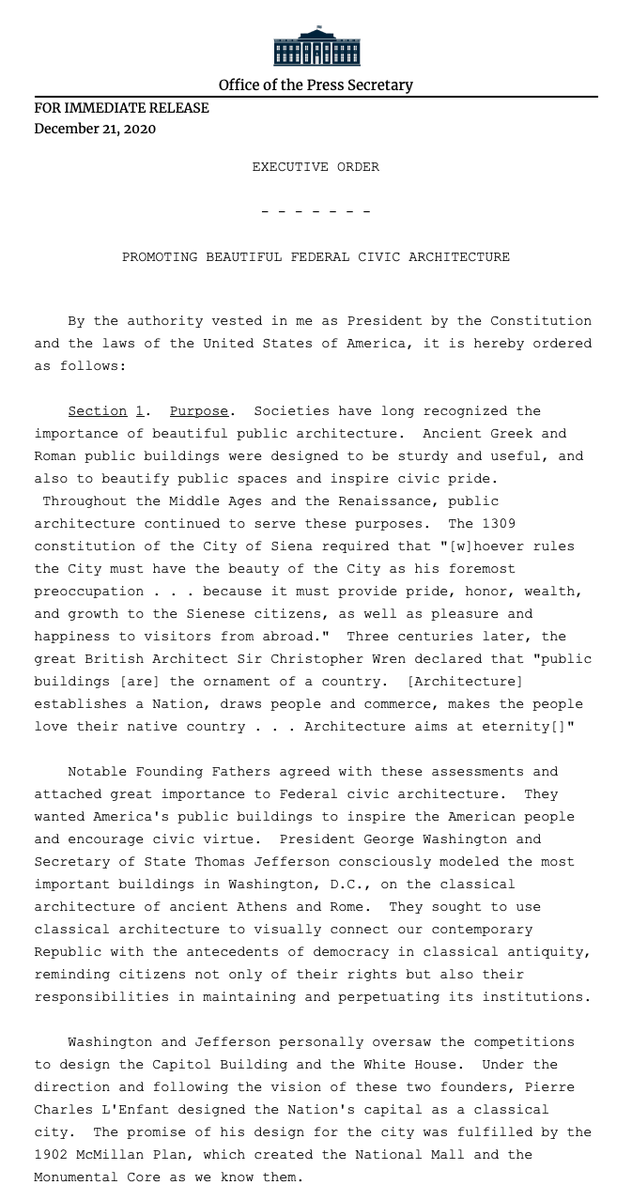 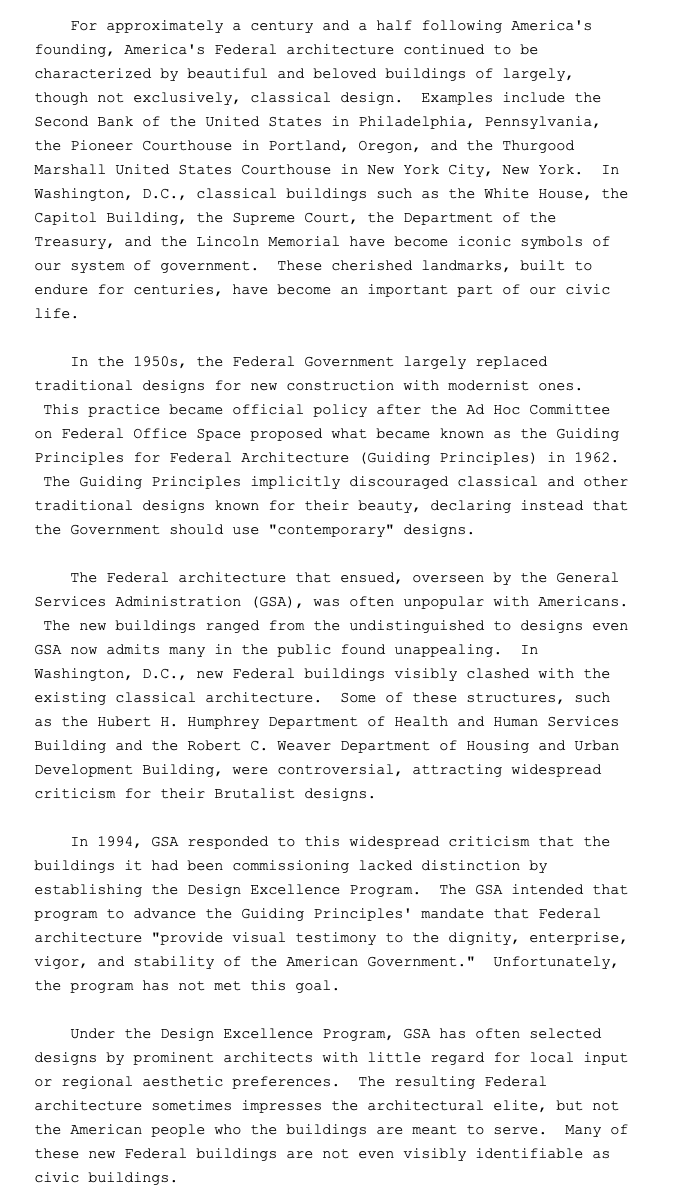 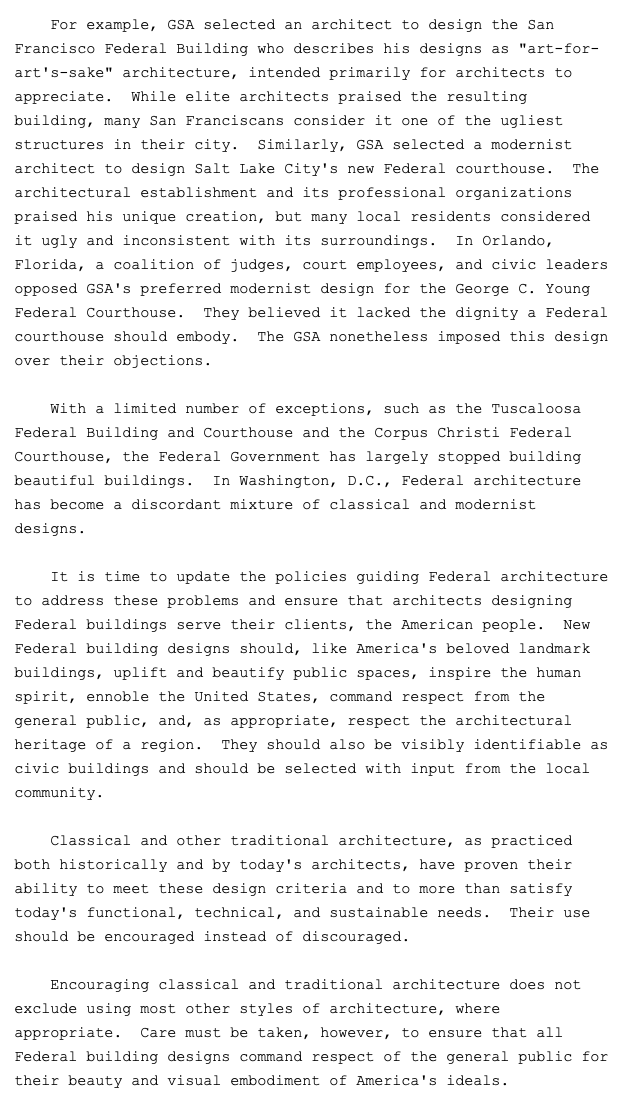 And this is why “Brutalism” is trending on Twitter.

What kinds of assistance will the Coronavirus stimulus package give US citizens…see details below. Fell short in some areas and far less than what as hoped for, but it has passed. Jobless benefits, aid to small businesses, stimulus checks and money for vaccine distribution are in. Aid for local governments and corporate liability shields are out.

Congressional leaders brokered a deal on an approximately $900 billion relief bill Sunday night, with promises to pass the legislation as soon as possible.

The bill would extend aid to millions of struggling households through stimulus checks, enhanced federal unemployment benefits and money for small businesses, schools and child care, as well as for vaccine distribution. It also repurposes $429 billion in unused funds provided by the Cares Act for emergency lending programs run by the Federal Reserve.

The bill comes at a critical time for the recovery as the coronavirus pandemic is overwhelming the nation’s health-care system and scores of Americans were set to lose federal aid by the end of the year. Two separate bill summaries released by Republican and Democratic congressional leaders late Sunday, as well as reporting by The Washington Post, confirmed some details of what’s in and what’s out of the bill.

The legislation includes $600 stimulus checks per person, including adults and children. That means a family of four would receive $2,400, up to a certain income threshold.

The agreement extends until Jan. 31 a moratorium on evictions that was slated to expire at the end of the year. The incoming Biden administration can extend the deadline further.
The bill includes $25 billion in emergency assistance to renters, although it remains unclear how the money will be distributed.

Out: Aid for state and local governments; corporate liability protections

Aid to state and local governments

One of the most fought-over issues between Republicans and Democrats revolved around whether companies can be sued by workers over coronavirus outbreaks. Democrats wanted protections for workers, while Republicans warned against a slate of potential lawsuits.

For weeks, lawmakers from both parties attempted to reach a compromise on the “liability shield” so infighting didn’t hold up a broader economic relief bill.

*The bill reduced the amount in weekly jobless benefits from the $600 that unemployed Americans received over the spring and summer.