📆 What The Fuck is on the Calendar

Tues, 1/16 at 10am EST: DHS Secretary Nielsen to testify at Senate Judiciary Committee

This is scheduled to be a general oversight hearing - however in the wake of Trump’s “shithole” comments, she is likely to be asked about them. Secretary Nielsen is one of the ones in the room who “do not recall” Trump’s statements.

Watch the hearing on CSPAN or at the Judiciary committee’s website on Tuesday!

The interview will be behind closed doors and will focus on Bannon’s time on the campaign, not the transition or his time in the White House. (HuffPost)

Update: Bannon refused to answer majority of questions from the committee, at the request of the White House, even after the committee subpoena’d him on the spot during the interview (Details)

Lewandowski’s interview date is not confirmed, but will be behind closed doors and he has said he won’t plead the fifth as other witnesses have done. (The Daily Beast)

And the winners are…

Here’s what you need to know…

The annual week-long après-ski with the rich and powerful kicks off in Davos today. Here’s what you need to know…

The Latest: Trump’s Davos trip still on ‘if all things go as expected’ with govt shutdown (Politico)

Good news! MT declares net neutrality is not negotiable…did I hear NY is following their lead??
And Comey had a book releasing in May! You probably knew that…

Trump to give the State of the Union address at Capital Hill tomorrow at 9pm EST; coverage begins at 8pm EST on most cable news stations.

What the Fuck to Know

The World Wide Threats hearing is a general reoccurring oversight hearing - but, as with almost all of the open Intelligence hearings lately, it will most likely be interesting (to say the least).

Watch the hearing on CSPAN or on the committee’s website tomorrow!

I have watched some of this hearing on YouTube- apparently every National Security member agrees that Russia did hack our elections and are still very active BUT nothing really has been done about it! Very disturbing! They are about to re-adjourn, so I’ll be back later.
Anyone who has watched, I would love to hear your thoughts and ides about the hearing. Thank you!

ADD TO YOUR CALENDAR:

Hicks’ is expected to be interviewed tomorrow, which was originally scheduled for last month. It’s still unclear if she’ll actually be responsive or go all Bannon-style on the committee. 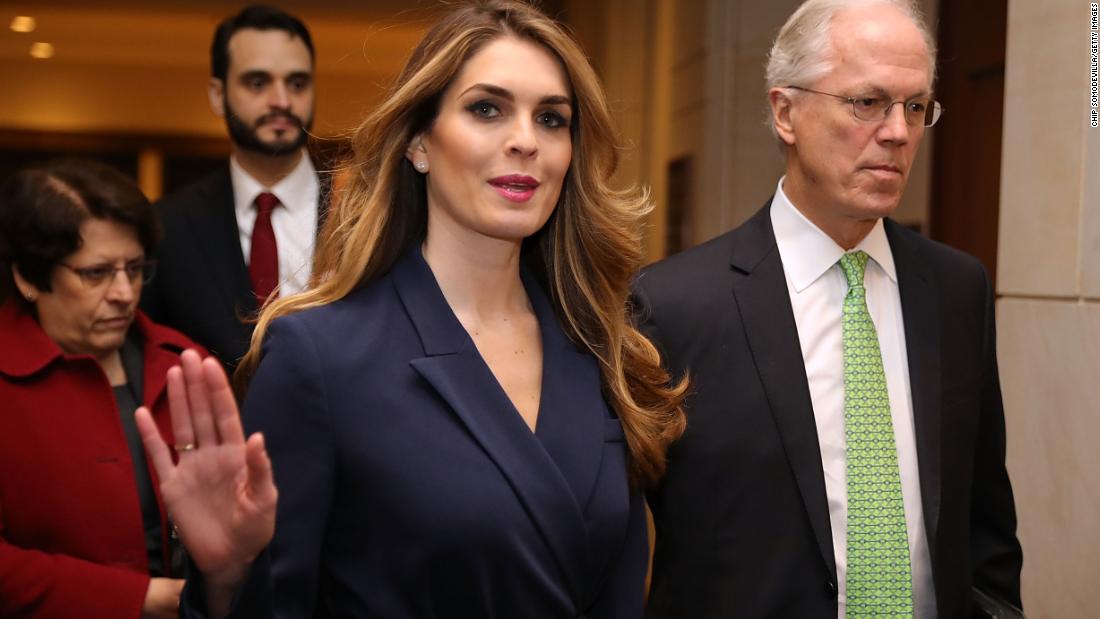 During closed-door testimony that stretched roughly nine hours Tuesday, White House communications director Hope Hicks was pressed about whether she had ever lied for President Donald Trump -- and acknowledged she has had to tell what amounted to...

Tomorrow is the PA-18 Special Election! Update: In a +20 Trump district, Conor Lamb pulled off a major upset and won by less than 1,000 votes! The Blue Wave is coming!

Sure hope they “sack” Saccone & vote Conor Lamb! That trump went there to speak on behalf of GOP candidate & then ended up hardly saying anything about him, just went on with his usual self-centered ranting- is both pathetic & hilariously typical-trump.

Today is the Russian Presidential “election”.

There are already widespread reports on ballot box stuffing.

I will add any English articles if I see (most are in Russian). Max Seddon is a good Twitter follow for updates, since he’s actually there!

This is a great generational piece about the teenagers who who have only known life under Putin & are now eligible to vote. Worth a read! 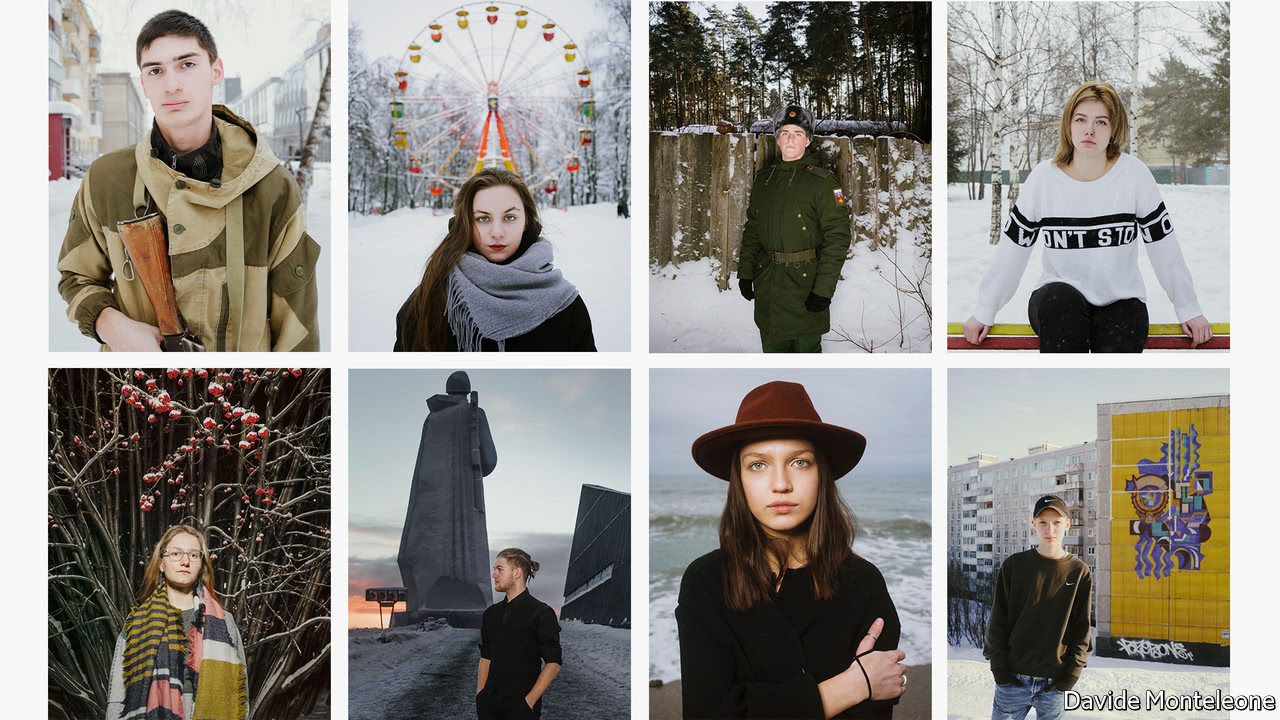 We interviewed dozens of teenagers who have only known life under Putin. Find out what they think about Russia and the world

More like teens here than different. Some seek change, others complacent as long as there’s food on the table, & some in the middle, like Sonia Bondarenko who said “People who try to run straight through glass usually end up getting hurt.” Very interesting read. 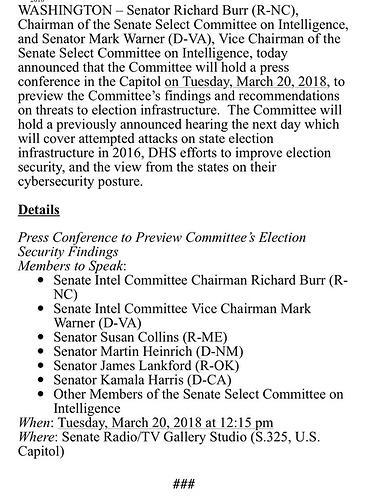 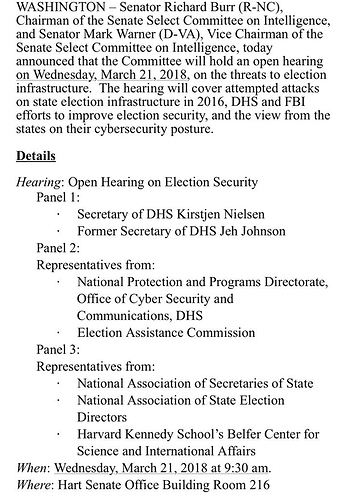 So in two days the House Republicans on the Intel Committee plan to go on record approving their report. In light of everything that has come out in the last few days, if they do actually validate the report and officially shut down their investigation (cynical me is confident they will), then shame, shame, shame on them. The result of this ballot, showing how each Republican voted, had darn well better be made public so we can broadcast it far and wide during the 2018 elections.

starts today - see if your MoC is holding a townhall (or if they are MIA)!

This date comes from a CNN article. And you may want to check out the article if you’re not familiar with where van der Zwaan fits in the Trump-Russia scandal.

Set your DVR – this will be the first sentencing of the Trump-Russia scandal so I have a feeling it will be a true media circus with “satellite dish vans” circling the court house. Undoubtedly, van der Zwaan will try to slip in unnoticed, but he’s going to have to dodge a mob of camera crews trying to record his “perp walk.” And he will also try to slip out – that is, if he is allowed to slip out. There’s a good chance he will go directly to jail without passing go.

Van der Zwaan’s charge carries a maximum sentence of five years in prison, but he qualifies for a recommended sentence of zero to six months. He can also be fined up to a $250,000. This guy and his family are über rich so a fine will mean nothing – that’s why Mueller has called for jail time.

If van der Zwaan does serve time, I’ll wager it won’t be more than a month or two. The reason I say this is that, although Mueller argued for jail time in the sentencing memo he filed, he also closed the memo with this line: “In any event, a sentence that ensured van der Zwaan’s return to the United Kingdom for the birth of his child in August 2018 would be within the recommended Guidelines’ range.” In other words, Mueller is telegraphing to the judge that it would OK with him if van der Zwaan served a sentence that ended in July. It would be unusual for the judge to impose a stricter sentence than what the prosecution is “signaling,” but it’s still possible. It’s also possible that, if the judge is feeling lenient, she may let van der Zwaan walk. Or… could there be a Trump pardon in van der Zwaan’s future?

This evening on MSNBC’s All In, Chris Hayes interviewed Senator Blumenthal about the emoluments case he and 200 other Democrats have filed against President Trump. The senator gave an excellent overview of the case and reminded viewers about the next step which is a hearing scheduled for June 7. (Unfortunately, this segment is not available on MSNBC’s free web site, but if you have paid access to the program, the relevant segment is about 5 minutes in.)

BTW, the outcome of this hearing is crucial to the plaintiffs since the judge will be considering a motion from Trump’s lawyers to dismiss the case.

Here is a high-level overview of the case:

And here is an article for legal nerds who want to dive in a little deeper:

Attorneys for the president urged a federal judge Monday to dismiss the emoluments clause challenge he faces from nearly 200 members of Congress, insisting that none of the arguments raised by raft…

Friday, June 8, 2018 - Court Appearance by James Wolfe, Director of Security for Senate Intel Committee who was indicted for lying to the FBI

Wolfe, of Ellicott City, Maryland, is due in court Friday.