A daily community thread to collect updates and events pertinent to the daily shock and awe, this is The Latest. Updates will contribute to @matt’s daily WTFJHT posts.

This thread has ended. The discussion continues here: The Latest - Wednesday, October 7.

Looking for the Calendar?

What we’re all talking about?

Most liked meme from yesterday

@matt let me know if you like this format? I can do this no problem

@Pet_Proletariat you are awesome as always! I can help out too once I get the hang of it. (don’t want to step on toes tho, just here if/when you need me.)

Fallout - lots of it just within the WH Communications area

"The collateral damage is going to be pretty significant I think," a N.Y. Times reporter told Axios.

White House reporters are increasingly anxious and angry about the Trump administration’s handling of COVID-19 cases within its own building.

State of play: Several White House reporters have tested positive and many are trying to figure out whether they and their families need to quarantine.

“My wife has now tested positive for COVID. The collateral damage is going to be pretty significant I think.”
— N.Y. Times White House correspondent Michael Shear in an interview with Axios

Driving the news: White House Press Secretary Kayleigh McEnany announced Monday that she tested positive for coronavirus, sending White House reporters scrambling to figure out whether they had been exposed.

What they’re saying: Members of the press corps have expressed frustration that they’ve been directly exposed to officials with the virus without being warned.

The other side: Ben Williamson, a White House official who works in the communications department and is also an aide to White House chief of staff Mark Meadows, tweeted Monday that McEnany “briefly removed her mask at the mic to answer questions, was there for two questions and only 58 seconds (would not constitute ‘sustained contact’ per the CDC), and was socially distanced from reporters in the area.”

NYT’s Michael D. Shear believes he was hit by the same outbreak that has reached the president and several of his team.

A reporter who believes he contracted COVID-19 either at the White House or on Air Force One says he’s still had absolutely no contact from any officials since he tested positive for the disease. Speaking to CNN Monday morning, Michael D. Shear of The New York Times said he visited the White House last Saturday ahead of taking a flight on the presidential plane, where Trump spoke to him and other reporters without wearing a mask. Since then, despite the White House’s insistence that “full contact tracing” was taking place in light of the outbreak that reached Trump himself, Shear has heard nothing—even after testing positive. He told CNN: “It’s now, you know, 10 days, 11 days, whatever, since I think I was probably infected on that Saturday. I have not been contacted by the White House. Nobody from the White House has said ‘boo’ and asked anything about where I was, who I talked to, or who else I might have infected.

Question - is this to be the general ‘landing’ page for the day, and an area for concentrated events per day? Like when we had an ‘early page’ for day 1352 because it was such a FREAKISH NEWSDAY?

I just started in on it. #DidIDoTheRightThing?

The idea is that you share breaking news here, if something relates to a topic you are already working just cross post. But feel free to still post to the longer topic threads as we try to trim them down to a more comprehensive size. Anything off topic will not be included.

New Readers don’t know how to jump into this forum, so this was my way of giving them a landing page to start.

We can also go the other way, this big news

Portrait of a President General Discussion

Lawyers for E. Jean Carroll contest DOJ intervention in Trump defamation case Attorneys for writer E. Jean Carroll filed a motion in a New York court Monday contesting the Department of Justice’s notice seeking to replace President Trump’s private lawyers in her defamation lawsuit against him. Details: “There is not a single person in the United States — not the President and not anyone else — whose job description includes slandering women they sexually assaulted,” Carroll’s lawyers said i…

Trump making crazy claims again, and being debunked. Trump echoed his earlier false claims that Covid-19 was comparable in lethality to the flu on Tuesday, which experts say is much less deadly than coronavirus.

Trump says he intends to debate Biden next week in Miami.

President Trump announced on Tuesday that he is planning to attend next Thursday’s debate in Miami against former Vice President Joseph R. Biden Jr. despite his continued struggle with the coronavirus and unresolved questions about the event’s rules.

“I am looking forward to the debate on the evening of Thursday, October 15th in Miami. It will be great!” the president tweeted early Tuesday, the morning after he returned to the White House from Walter Reed National Military Medical Center.

By midday Monday, Mr. Trump made it clear he would soon be moving forward with his campaign, even as medical experts warned that the course of his illness is unpredictablein a man of his age and weight.

Poor man thinks he’s going to be able to still debate while contagious.

NBC Medical Unit: According to the CDC, Trump would be considered contagious for 10-20 days from onset of symptoms, depending on the severity of his disease. That means he might still be contagious if he travels to Miami for the presidential debate.
4 Likes
Pet_Proletariat October 7, 2020, 3:51pm #26

President’s doctor says Trump reports no symptoms and has an oxygen saturation level of 95-97%. https://t.co/1wG9CvCAWJ 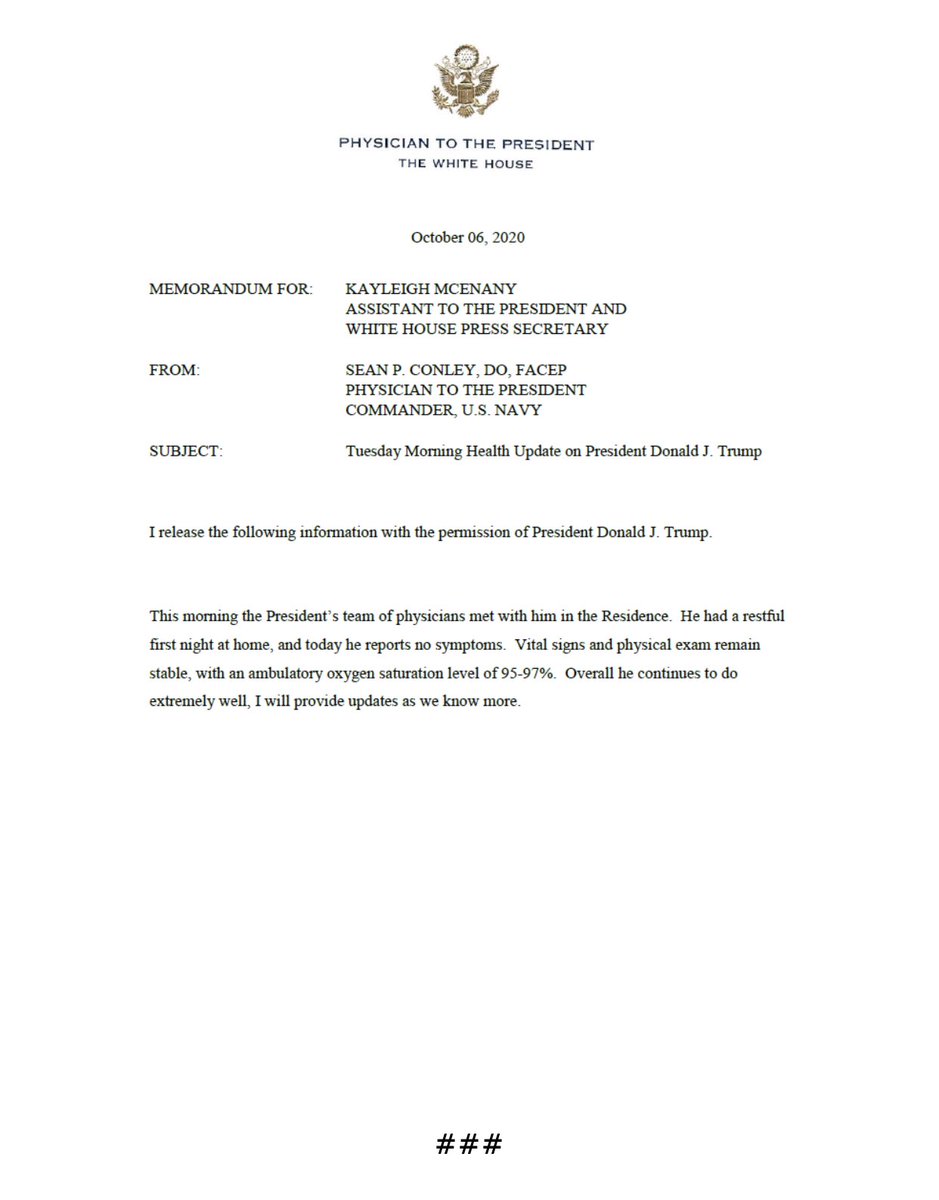 I love this. Thanks for taking this on! I’m pretty sure I can create a bunch of these “stub” pages and set them to publish automatically on the correct day. I’ll look into that.

I’ll add some more notes later but I’m super stoked on this!

The idea is that you share breaking news here, if something relates to a topic you are already working just cross post. But feel free to still post to the longer topic threads as we try to trim them down to a more comprehensive size. Anything off topic will not be included.

@dragonfly9 I think what @Pet_Proletariat said is right: Use this as an in the thick of it catch-all for the day’s news. The examples of cross-posting also make a ton of sense: put the news in the topic that it has the greatest affinity for, then (using the

icon url) cross-post it here. That way we end up with an accounting for the “day” while also maintaining the flexibility of the forum and all the other threads.

Live updates: Trump back at White House after Covid-19 treatment at Walter Reed

"We remove incorrect information about the severity of Covid-19, and have now removed this post," a Facebook spokesperson said in a statement to CNBC.

Facebook and Twitter on Tuesday took action against a post from President Donald Trump that falsely claimed the seasonal flu is more deadly than the coronavirus.

That way we end up with an accounting for the “day” while also maintaining the flexibility of the forum and all the other threads.

And now we have a way to go back if we wanted to and break down some those larger threads into shorter timeframes for easier reader comprehension. There’s so much good archival work floating in this forum, we should actually manage it better.

How do you feel about that?

FYI I might play a little with the format, including adding the notes from the blog to the main post here. It might not be right but I think we can play with it till we find something that works and makes sense. Hopefully in time we can merge some of the work being done here w/ the work I’m doing over on the main site, and bring the community closer to the publishing process.

Trump tweeted that he is “looking forward to” the second presidential debate even as he continues treatment this week for Covid-19.

Trump, battling Covid-19, says he's 'looking forward to' the next...

Centers for Disease Control and Prevention guidelines say people should isolate for 10 days from the point of showing systems, and in severe cases, 20 days.

“I am looking forward to the debate on the evening of Thursday, October 15th in Miami,” Trump said. “It will be great!”

The president is still battling his Covid-19 infection after first showing symptoms on Thursday, according to the White House. Centers for Disease Control and Prevention guidelines say people should isolate for 10 days from the point of showing systems, and in severe cases, 20 days.

Gen. Mark A. Milley, the chairman of the Joint Chiefs of Staff, along with several of the Pentagon’s most senior uniformed leaders, are quarantining after being exposed to the coronavirus

The Chief of Staff of the US Air Force, Charles Brown, the Chief of Naval Operations Adm. Michael Gilday and the Chief of Space Operations, Gen. John Raymond, also are all working from home, according to several officials.

The top US general, Gen. Mark Milley, and several members of the senior Pentagon leadership are quarantining after a top Coast Guard official tested positive for coronavirus, several US defense officials tell CNN.

Trump Live Updates: Trump, Back at the White House, Moves Ahead With Campaign

Dumb and callous. President Trump said he is shutting down negotiations for a new coronavirus economic relief bill and won’t support a new stimulus package until after the election. https://www.bloomberg.com/news/articles/2020-10-06/trump-tells-his-team-to-stop-talks-on-fiscal-stimulus-package